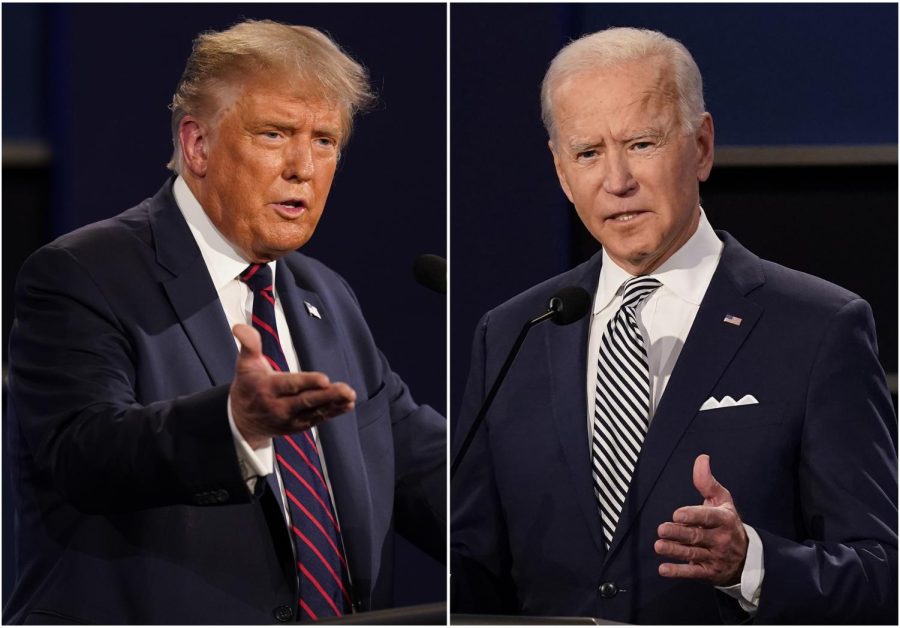 (CNN) — Vote counters worked all night in the crucial states that will decide the cliffhanger election with margins narrowing in Arizona, Georgia and Pennsylvania as former Vice President Joe Biden edged toward the 270 electoral votes needed to win and President Donald Trump pinned his hopes on a more uphill route back to the White House.

Two days after Election Day, the slow churn of results is expected to offer more clarity Thursday on who will lead America for the next four years and when that final result will become known. Biden currently leads with 253 electoral votes to Trump’s 213. The race is coming down to tight vote counts in Arizona, Georgia, Nevada and Pennsylvania.

If the former vice president wins Pennsylvania, the race will be over. Thousands of mostly mail-in votes remain uncounted so far, with Biden trailing by just over 160,000 votes. The Keystone State’s Lt. Gov. John Fetterman, a Democrat, told CNN that the result could come as early as Thursday and that he believed outstanding ballots in areas that favor Democrats would deliver a clear win for Biden.

The Democratic nominee has also been making a run in Georgia, which has 16 electoral votes, where the President’s lead dwindled to about 18,500 votes overnight as results came in from Fulton County around Atlanta with 96% of the state vote count reported.

The story was reversed in Arizona, where several tranches of votes from Maricopa County, which includes Phoenix, narrowed Biden’s lead to just under 69,000 votes with Trump’s team insisting the President will eventually prevail and keep his hopes of a path to 270 alive.

There is also a close contest in Nevada, which released very little information on Wednesday with an estimated 200,000 ballots outstanding. The state is expected to report another batch of results around midday Thursday. Democrats had the state down as a likely win but it is closer than expected. The final result will come down again to mail-in votes, which could favor Biden since thousands are outstanding in Clark County, around Las Vegas which is usually Democratic territory. If Biden holds leads in Arizona and Nevada, he will get to 270 and will be able to claim the presidency.

Trump’s team, seeking to keep his slim path to victory alive, has launched a flurry of sometimes contradictory legal challenges and political offensives, demanding vote counts continue in states where he is behind and wanting them shut down in those where he leads.

Trump did not appear in public on Wednesday after accusing Democrats of trying to steal the election — even though continuing vote counts are working through legally cast ballots.

Biden did come before the cameras, and while stopping short of claiming victory, he sought to present an image of momentum and confidence and made a thematic pivot from the partisanship of the campaign trail to the calls for unity expected of an incoming president. He dismissed Trump’s attempts to undermine the results, stating that “the people rule. Power can’t be taken or asserted.”

“There will not be blue states and red states when we win. Just the United States of America,” Biden said Wednesday afternoon as he promised to bring the country together. “We are not enemies. What brings us together as Americans is so much stronger than anything that can tear us apart.”

As one piece of his legal strategy, the Trump campaign plans to ask the Supreme Court to intervene in a case challenging a Supreme Court decision that allowed Pennsylvania ballots to be counted after Election Day. The justices had refused to expedite the appeal before the election and are considering whether to take up the case.

Trump and his campaign team also sought to raise doubts about how Biden made a late surge to victory in the vital state of Wisconsin, where the Democrat rose on the strength of mail-in and early votes that were counted after most of the ballots cast in person on Election Day.

The Trump campaign said Wednesday that it will demand a recount in Wisconsin while mounting legal challenges in Michigan and Georgia.

“The President is well within the threshold to request a recount (in Wisconsin) and we will immediately do so,” Trump campaign manager Bill Stepien said in a statement.

Stepien noted that results show “a razor thin race as we always knew that it would be” and claimed that there were irregularities in several Wisconsin counties, but did not specify what the campaign believes those irregularities are.

The campaign’s state-by-state approach revealed the glaring inconsistencies in its strategy: it appears to be trying to stop vote counts in states where Trump is trailing, like Pennsylvania and Michigan, while demanding that all the votes are counted in states where it believes the President has a chance of catching up to Biden, like Arizona and Nevada.

Candidates can ask for a recount in Wisconsin if they are within 1% of the winner’s vote total — but the recount cannot be formally requested until completion of the canvass, which could be as late as November 17. It seems highly unlikely that a margin the size of Biden’s lead in Wisconsin, about 20,000 votes, could get reversed on a recount. But because the margin is less than 1%, the Trump campaign is well within its rights to request a recount.

With CNN’s Kevin Liptak reporting that even Trump himself appears to skeptical of the thin basis for some of the challenges that his campaign is filing, the campaign said it plans to file a lawsuit in Georgia claiming that a Republican poll observer in that state witnessed 53 late absentee ballots “illegally added to a stack of on-time absentee ballots in Chatham County.”

Trump offered a less-than-enthusiastic endorsement of his team’s legal strategy in phone calls with some of his allies on Wednesday, sounding resigned to the plan falling short and questioning why his team hadn’t successfully challenged voting rules before the election, even as he remained willing to see it through, CNN reported.

The Trump campaign also said it is filing a lawsuit in Michigan asking the state to halt its count because it has “not been provided with meaningful access to numerous counting locations to observe the opening of ballots and the counting process, as guaranteed by Michigan law.”

Ryan Jarvi, a spokesperson for Michigan Attorney General Dana Nessel, responded to the threat of the lawsuit by saying in a statement that “Michigan’s elections have been conducted transparently, with access provided for both political parties and the public.”

Trump campaign officials said Wednesday afternoon that they believe the President can hold his lead in Pennsylvania, but they are also suing the commonwealth, claiming that Democratic election officials are “hiding the ballot counting and processing” from Republican poll observers.

Trump Deputy Campaign Manager Justin Clark said the aim of the lawsuit is “to temporarily halt counting until there is meaningful transparency and Republicans can ensure all counting is done aboveboard and by the law.”

The President is making baseless claims that the election, which had looked more favorable to him late on Tuesday before hauls of early votes started being tabulated, is being stolen from him and demanding that vote counting in some areas should stop. An appearance in the White House East Room in the early hours of Wednesday in which he falsely claimed victory represented his most brazen threat yet to the democratic principles that underpin the US political system.

“As far as I’m concerned, we already have won it,” Trump said, painting a picture at odds with the true state of the race. Earlier, Biden had warned each side needed to wait for the votes to be counted, saying, “We’re going to have to be patient until we — the hard work of tallying the votes is finished.”

And while the President has long threatened legal challenges to the election, the voting itself largely went peacefully, without violence at polling places or intimidation of people casting their ballots as had been widely feared, especially given Trump’s attempts to discredit voting procedures ahead of time.

But the election did not turn into the wholesale repudiation of the President and his wrecking ball presidency that Democrats had hoped for. Trump demonstrated a remarkable bond with his base of mainly White voters in rural areas and a new connection with groups of Latino voters in some states.

A blue wave many Democrats were looking for to end Mitch McConnell’s GOP Senate majority has so far not been realized, though some key races are still undecided. And despite aiming to expand their House majority, Democrats lost several seats and some threatened Republicans clung to theirs.

This is a breaking story and will be updated.