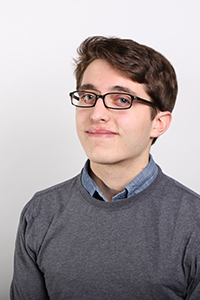 Mark Oprea is a junior English major and columnist for the Daily Kent Stater. Contact him at [email protected]

What do comedian Will Ferrell, actor Adam Sandler and the television network Adult Swim all have in common? They are all subjects of college courses currently offered at Kent State. But before you enthusiastically schedule one of these classes hoping to use it as a simple blow-off, there are a few things you should know about them.

In 2004, Kent State welcomed a unique addition to its course offering: a whole class dedicated to watching shows from the Adult Swim network. After spending several years offered as a special topics class in the School of Journalism and Mass Communication, it began to receive massive attention from the media. It reached national attention in 2009 when the G4 network ranked the course No. 3 on its list of coolest college classes. This national awareness created a tremendous amount of demand not only for this course, but for similar courses as well.

Ron Russo, adjunct professor of film at Kent State, recognized this high demand and responded accordingly. Proud of his achievement with the Adult Swim class he created, Russo was yearning for more. So in 2011, he introduced a similarly structured class on the career of Adam Sandler, gaining not only more media attention but also some from the actor himself. This summer, fans of Will Ferrell will also be able to “study” his films for class credit.

So why should one sign up for one of these special topics classes, other than just for the cool factor?

Well, these classes are not created to cater to students looking to breeze through the semester writing hurried papers on “Step Brothers” or “Big Daddy.” Professors like Russo do not create such courses solely because they know students are interested in pop culture, but rather hoping they become curious in something else.

“The very nature of a special topics [class] is for [a college] to pilot, to try out . . . or take advantage of something that’s in the news or happening in current events,” said Therese Tillett, director of curriculum services.

The class may have stemmed from a professor’s obsession or a means to draw students into a certain program. Content for the course itself is rather lenient as long as it receives the approval of the department’s faculty.

“The [main] expectation [for these courses],” Tillett said, “is that they are at the college level.”

This notion of being “college level” is surely not ignored by the professors themselves. Russo’s courses are not just about watching television.

“Students are expected to learn how a network grows . . . and get a better idea of how things work in that market,” Russo said in a 2009 KentWired article about the Adult Swim course.

Kent State is not the only institution riding this pop culture phenomenon in academia. A course offered at the University of Illinois uses Oprah Winfrey to study race, class and gender issues; a class at Georgetown University observes Star Trek through the writings of the great philosophers; and the University of South Carolina offers students a chance to study Lady Gaga alongside an “obsessed” professor of sociology.

These courses are not pop culture classes — they are courses that use pop culture as a front to study theoretical material. Spock is merely a guise for Plato; Will Ferrell is a chaperone for the operations of the film industry. This is sort of a new liberal approach to the scholarly tradition of the liberal arts. The question is where the dividing line is between traditional education and pop culture — and where Lady Gaga lies.