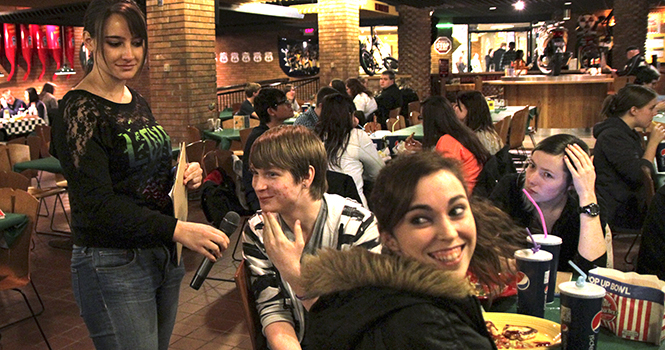 Wolfgang Davidson, a freshman anthropology major, correctly answers a question about Isreal during a mock interactive newscast hosted by Golden Flashes for Isreal Thursday, March 7, 2013 in the Rathskeller. Photo by Melanie Nesteruk.

Israel Peace Week is a campaign to counter anti-Israel propaganda with the message, “Israel wants peace and has demonstrated its willingness to make painful sacrifices for peace,” according to Hasbara Fellowships’ website. The campaign also outlines options for peace, existential threats to the Jewish state, and the values and accomplishments of a thriving Israeli democracy in an otherwise despotic region.

Robert Weitzner, president of Golden Flashes for Israel, started the organization this year because he thought it was important to have a representation of Israel on campus and to provide information to the student body about the conflict and peace in Israel. Weitzner, senior sociology major, decided to participate in Israel Peace Week to show the campus community that Israel stands solidarity with peace and to have a representation of the international event on Kent’s campus.

“I think this week has had a good impact on the Kent State student community,” said Weitzner. “It opened the minds of a lot of students to see the truth of what is going on in the Middle East.”

On March 5, students gathered in Room 137 of Bowman Hall to eat pizza and watch the movie “Israel Inside” as part of the events sponsored by Golden Flashes for Israel.

Weitzner said he hoped the event would challenge students to delve deeper into Israel’s society unlike what he feels the media chooses to portray.

“This movie is being featured for peace week specifically in campuses internationally,” said Weitzner.

Janine Butler, freshman special education major, attended the event because she wanted to learn more information about Israel and to be exposed to another culture other than her own.

“I think peace week is a great opportunity for students to become aware of social justice issues in Israel and how to promote peace,” Butler said.

Events for Israel Peace Week were hosted each day this week and will end on Friday. On Friday, Weitzner will host a small Israel Shabbat with authentic Israeli food at his home in Kent at 6 p.m. The event will be RSVP invite only with 20 invitations available.

“A Shabbat marks the close of a week and the beginning of a time of rest,” Weitzner said. “It’s a chance to celebrate and relax after all the hard work that has been done this week.”