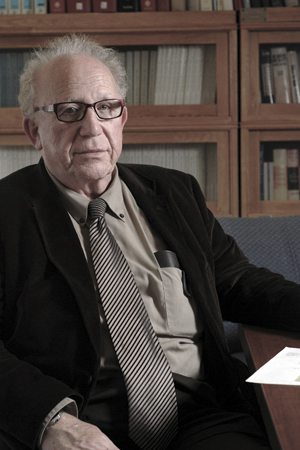 Factor taught a class at Cleveland Heights High School, where he met a German exchange student who helped him trace his mother. Factor has taught Jewish studies classes at Kent State since 2006. Photo by Matt Hafley.

As many Kent State students know, Elie Wiesel will visit Kent State on April 11. In preparation for the event, the Jewish Studies program and the history department have been working together to produce Lunch and Learn seminars pertaining to the Holocaust for students to attend before Wiesel’s visit.

Chaya Kessler, program director of Jewish Studies, said the Holocaust is a very complicated subject and difficult to teach. She said the Lunch and Learn seminars are a great way to prepare students for Elie Wiesel’s visit in April.

“It’s not only about what his [Elie Wiesel’s] message is, it’s really for all of us to learn,” Kessler said.

Kessler said that many high schools shy away from teaching the Holocaust and, as a result, many students know little about it.

“One of the ways many schools go around it is teaching the Holocaust through literature,” Kessler said.

Thursday’s Lunch and Learn featured Sol Factor, who gave an informational talk about children during the Holocaust.

Factor, a history department instructor, is a child survivor of the Holocaust. He was abandoned when he was two weeks old.

“I belong to a child survivor group and they’re very nice to accept me because I was not living during the Holocaust,” Factor said.

Factor said his mother survived the Auschwitz death camp during WWII, giving birth to him in 1946, shortly after the end of the war. He was separated from his mother and brought to the U.S. and later adopted.

Factor has since found his mother, but she did not want to meet with him. Many thought he would break down over it.

“I have to tell you something; I didn’t,” Factor said.

During the event, Factor outlined the types of children involved in the Holocaust including those of Nazi, Gypsy, Jewish, and Jehovah’s Witness ancestry. He went on to describe the harsh realities these children faced during the Holocaust. He spoke of the Hitler Youth brainwashing children and the camps children were sent to, as well as the slave labor and extermination that occurred. Factor said innocence was lost during the Holocaust for many children.

Factor said his knowledge of the Holocaust has allowed him to do many things besides teaching.

Emily Moran is a College of Arts and Sciences reporter for The Daily Kent Stater. Contact her at [email protected]