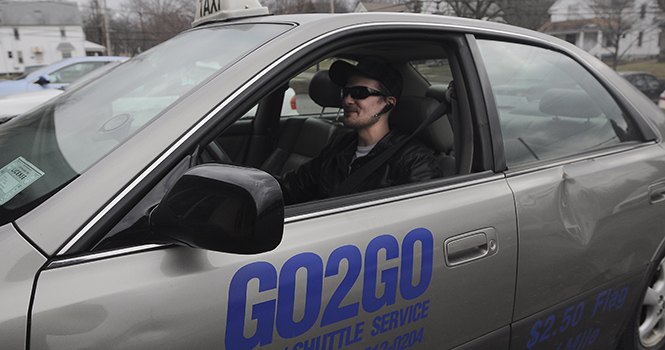 Keith Darling, Medina resident, returns from a run with Go2Go Taxi on March 7, 2013. He has been working for the cab company for a month. Photo by JACOB BYK.

The city of Kent offers four registered transportation services: Porter’s Taxi, Go2Go Taxi, Doctor Cab and 1 Fast Transport. Although other services might be offered in the area, those four are the only that are officially registered with Kent.

Rebecca Castilleja, senior technology major, said she has ridden all of the taxi services in Kent, except for 1 Fast Transport, and has had similar experiences with each company.

“Porter’s Taxi, Doctor Cab and Go2Go have always been friendly, and the rates aren’t that expensive,” Castilleja said. “They all keep their prices pretty evenly matched.”

Sizemore said Porter’s Taxi charges flat rates because they feel it makes customers more comfortable than watching a running meter. Rides can be scheduled over the phone.

“We don’t have as many vehicles as other taxi services in the area,” Sizemore said. “But when it comes down to hiring our drivers, we instill in their head the importance of quality customer service.”

“One time I was at Eagle’s Landing and I needed a taxi,” Grasso said. “I called Porter’s Taxi, and they were there in 10 minutes. I didn’t have cash, but the driver swiped my card using an application connected to his iPhone. [It was] very neat.”

Cost per mile for students in Kent: $2 plus $8 minimum

Cost per mile for students outside of Kent: $2.50 plus $8 minimum

Cost per mile for nonstudents: $3 plus $8 minimum

Doron Kutash launched Go2Go Taxi in 2007 when he was a Kent State student earning his master’s degree in business. Kutash said he saw an opportunity for a taxi service in Kent after attending a brainstorming session among Kent community members on how to improve the downtown area. He said he thought the transportation service could help connect the city.

“I have a very strategic mind, and I saw that half of the ideas [presented in the meeting] were how to get people downtown,” Kutash said. “I just had a moment where I just realized that I will take care of that side; I will get people downtown.”

Kutash said Go2Go offers round-trip transportation from Kent to Merriman Valley in Akron for approximately $27 a ride and $2 for each additional person.

“We’ve been doing this for six years, and we’ve built up a customer base that we’ve served well,” Kutash said. “If you use a service and they treat you right and provide on-time service, people will habitually use that service, which they have for us.”

Courtney Rohan, senior zoology major, said she has been using taxi services around the Kent area every year in college.

“I’ve used Go2Go before, and it was easy to call them and they came to my friends and I promptly,” Rohan said. “I think my friends and I were probably loud and annoying during the five-minute drive home, but they were nice about it.”

Extra stops cost $3 during the day and $6 at night.

Tips are recommended for the drivers.

Robert Barnes, owner of Doctor Cab, started the company about three years ago to serve as another taxi service in the Portage and Summit County area. Barnes said the company was originally called “DR Cab,” but he said Kent State students started calling it “Doctor Cab.”

“We went with it,” he said. “I started it because I was working for another taxi company. I thought they weren’t doing things the right way. I told myself I could do a better job.”

Doctor Cab currently has three employees. Barnes said his company is good about calling customers five minutes before pickup and letting them know if they are running late due to traffic.

Julia Madjar, junior fashion merchandising major, transferred to Kent State from Ohio University in Fall 2012. Madjar said with her taxi experience, Doctor Cab has provided her with the best services.

“I was out one night, and I didn’t know what cab company to call to get home,” said Madjar. “My friend referred me to Doctor Cab, and I had a great experience. The service was timely and the van was very clean.”

1 Fast Transport is a transportation service that operates using limousines. Jayson Hoopes, the company’s owner, said he started 1 Fast Transport in 2009 after losing his job as a result of the economic recession.

Hoopes said he had a hobby of fixing vehicles and saw a need for a transportation service in the Kent-Ravenna area where he grew up. His limousines offer a unique feature: Riders who are at least 21 years old can drink alcoholic beverages in the vehicle’s rear compartments.

“We stay very organized because we don’t take on more than we can handle,” Hoopes said. “We don’t pick people up on the side of the street unplanned without a contract.”

1 Fast Transport has three limousines and five drivers. The company operates 24/7, but riders must call well in advance for a ride.

Daytime rates: $4 flat rate and $3 for each additional mile.

Cost from Kent to the Dusty Armadillo: $35 for up to four passengers, $40 for five to six passengers and $50 for seven to nine passengers.