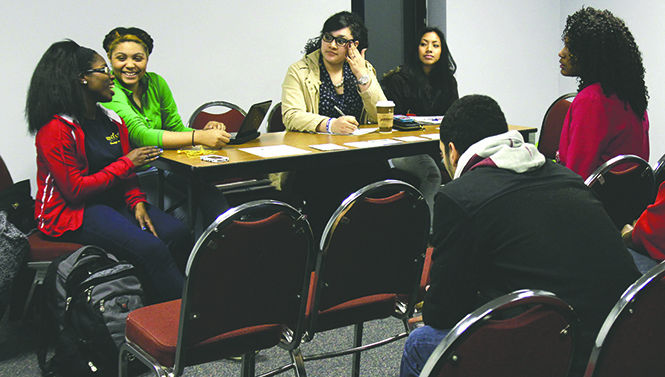 From left to right, event coordinator Maryssa Garrett, president Jinre Holman, public relations director Zulema Uscauga and treasurer Hannah Weaver of the Spanish and Latino Student Association discuss ideas to make SALSA better known to students on campus. The meeting was held on March 5 on the third floor of the Student Center. Photo by Adrianne Bastas.

Next year there will be four available spots on the Executive Board: vice president, secretary, event coordinator and public relations chair.

Victor Benton, freshman Spanish literature, culture and translation major, nominated himself to run for the position of vice president.

“I want to be part of organizations that I’m passionate about, and as a Spanish major, S.A.L.S.A. is a pretty passionate spot for me,” Benton said.

Benton also said he found the forum to be productive.

Holman was excited about the interactivity among the audience and the formation of new ideas for S.A.L.S.A.

“I’m ecstatic because, even though there weren’t a lot of people, I really appreciate the ideas that they had, the input that they had,” Holman said. “The interaction between people was really great. We have a lot of ideas for, not only programming, but for our volunteerism, social events, educational events and debates.”

Dorothy Bell, freshman chemistry major, brought up the idea of the group expanding the types of events that they coordinate.

“We should have more than just social,” Bell said. “Latinos have a lot of things to cover. We can have like forums or debates and stuff like that.”

After witnessing the productivity of the forum and with S.A.L.S.A.’s “Spice Up Your Life” week commencing Monday, Holman is optimistic about the future of the organization.

I think things are going to go great in the future,” Holman said.