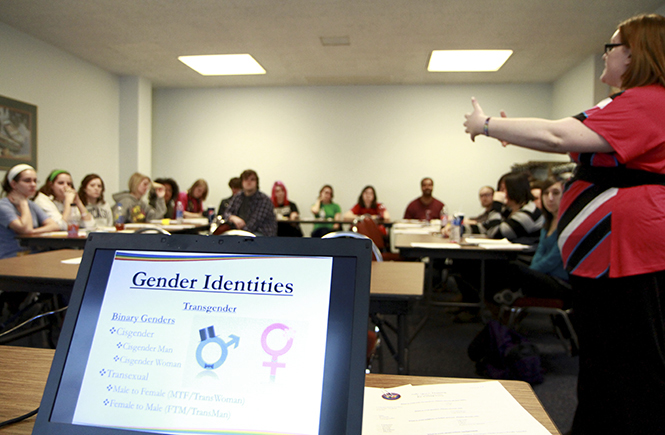 Roxie J. Patton, program coordinator of LGBTQ Center, talks to students during Safe Space Training on Tuesday, March 12 at the Student Center, about gender identities so that students can become allies to the LGBTQ community on campus. Photo by Yolanda Li.

Roxie Patton, program coordinator of the LGBTQ Center, developed the program based on the teacher edition already in place. The purpose of the training was to educate students on what it means to be an ally and how to be an effective ally to the LGBTQ community.

Patton and Jackie Bergeron, senior magazine journalism major, led the presentation. The program included an activity about the “coming out” process, a breakdown of vocabulary, such as gender identities and sexual identities, and a panel of students discussing their personal experiences and answering questions.

Each student on the panel shared her “coming out” story and what she believed others should know to become a better ally to Kent’s campus.

Gregg said just showing acts of kindness to others can make anyone a better ally.

“It’s just a good rule to try and be nice to others,” Gregg said. “All it takes is one person to change a person’s life forever, and you can be that person.”

Although this is Stawiarski’s first formal Safe Space Training, she said she has always considered herself an ally. She strongly encourages all students to attend this type of training.

“I would just really like to encourage people to get involved because it’s really a really supportive community,” Stawiarski said. “These safe space trainings are just so important, and I encourage everybody to come to them because it gives you the tools to be a constructive ally.”

Patton said she was extremely pleased all 25 of the available spots for the program were filled.

“I was really, really excited that we filled all the slots,” Patton said. “I got seven emails today from people who said that they tried to register and it was already full. It looks like we’ll probably expand a little next time.”

Patton also said that the Safe Space training is for all people, even those who don’t plan on becoming allies.

“Every single person that came through signed the ally pledge, which is really powerful to me,” Patton said. “I just think it’s really important that people, even if you don’t want to be an ally or you don’t know about being an ally, that you come and get the information so that you’re well informed about what our students are experiencing on campus.”