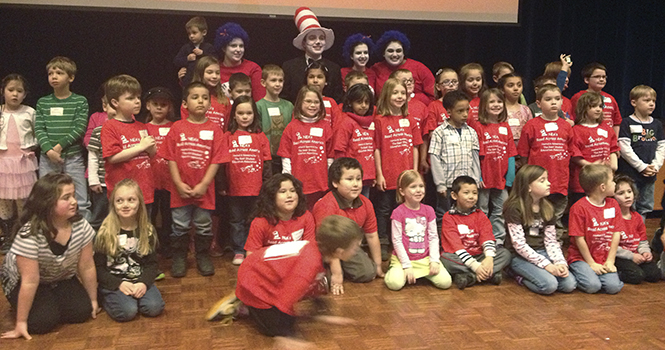 “I think all in all it was really good and flowed really nicely,” said Marisa Manocchio, KSEA president and junior integrated mathematics major. “We didn’t have any problems, and everyone seemed to enjoy it.”

KSEA invited 150 children in kindergarten through third grade from the Kent City School District to help celebrate Dr. Seuss’s 109th birthday by promoting children’s literacy. The KSEA hosts the NEA’s Read Across America event every other year, — a free event for children and parents in the community.

“We would like to do it every year, but the cost of putting on a free event for children is extremely costly,” Manocchio said. “What we like to do is put on the event every other year, that way it gives us two years to build up the funds we need.”

The event took place at the Student Center Ballroom. Registration began at 11 a.m. and the event ran from noon to 3 p.m.

During registration, the children were able to take pictures with Cat in the Hat and Thing 1, 2 and 3. Guest reader Joseph Giancola, superintendent of Kent City Schools, read Dr. Seuss classic, “One Fish, Two Fish, Red Fish, Blue Fish.” The kids were allowed to get their faces painted and pick out a free book donated by Firstbook during this time.

“Since I am the only male on the board, I have to be Cat in the Hat,” said Bradley Dalzell, senior integrated language arts major. “I love it, the kids have a great time.”

Dalzell is on the executive board of KSEA, and this was his second time being the Cat in the Hat. Dalzell said he posed with about 80 children other than the few who were afraid of his costume.

The kids participated in six different stations, rotating every 20 minutes. The stations included a Book Readings station, and various craft stations where children made a paper fish, hot air balloons, doorknob hangers and a picture frame. The event also featured a game station called Pin the Egg on the Plate, where the children were blindfolded.

Bartula is a senior advisor for KSEA and was the president in 2012. She said they have been planning the event since last summer.

After the station rotations were finished, Bartula and Things 2 and 3 gathered up all the kids and read “The Lorax.” Following the book reading, the kids sang “Happy Birthday” to Dr. Seuss and ate birthday cake. The day ended with Dalzell reading Dr. Seuss’s most popular book, “The Cat in the Hat.”

“It is just an event to celebrate Dr. Seuss’s birthday, and it is a lot of fun,” Bartula said. “I like volunteering at stuff like this, and I am all on board to do it again.”

At the end of the event, NSEA raffled off baskets for the parents. The themes included “mom and dad,” ACME and Avon and a Dr. Seuss basket. The money from the basket raffle will be used to fund the next event in two years. Before the kids left, they were given a certificate, T-shirt and a picture of them with the Cat in the Hat.