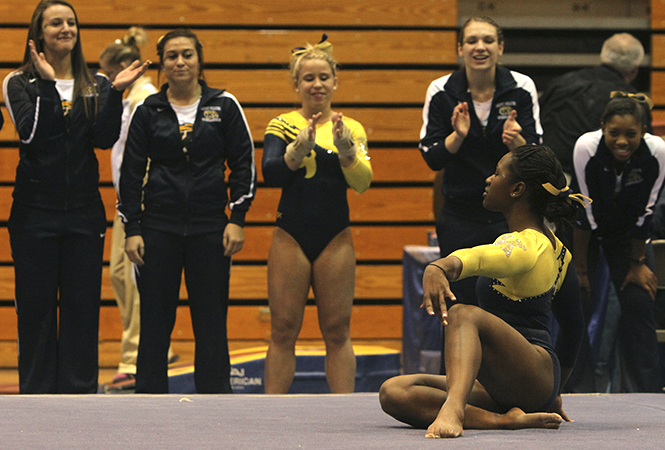 The Kent State gymnastics team cheers on sophomore Amiah Mims at the end of her floor routine during a home victory Jan. 25 at the MACC over Western Michigan and George Washington, 194.675 to 194.125 to 193.875 respectively. Photo by Shane Flanigan.

For an athlete, a healthy body and mind are essential. Whether it’s basketball, baseball, football or golf, the same applies. However as a gymnast, the body is flipped, twisted, and stretched into positions that some can only imagine, and the mind must remain focused on the task at hand. Any mistake made puts a gymnast at risk. For sophomore gymnast Amiah Mims, one simple mistake changed the course of her entire season.

Mims’ entry into the All-Around gymnastics line-up began with injury. When another gymnast was forced to step aside due to a bruised heel right before the quad meet against Penn State, Minnesota, and Towson, Mims, originally scheduled to compete in only the floor and uneven bars, was slated to take her position.

“It took me out of my comfort level,” Mims said, “and the nerves kicked in really quick. But my coaches and teammates helped calm me down.”

Her performance that night resulted in a second place ranking on the uneven bars with a 9.800, a 9.850 on the balance beam, a 9.750 on the vault and a 9.775 on the floor exercise. Her personal record-breaking scores placed her third in the All-Around with a score of 39.075.

At the first home meet of the season Mims was scheduled to once again compete in the All Around. On her first event, the vault, she received a 9.725. It was her second event, however, that changed the course of her 2013 season. While performing on the uneven bars, one mistake caused Mims to fall from the bars, resulting in a concussion.

“We had Sunday and Monday practice [after the meet], and I was miserable for both practices. I knew something was wrong by then, but I didn’t want to say anything because I didn’t want to get kicked out of the line-up,” Mims said. “It wasn’t until my Monday night class that I realized there was something really wrong because I couldn’t focus.”

After seeing her trainer and getting the confirmation of a concussion, Mims was put in what she referred to as a “quarantine” and was not allowed to do anything.

“I wasn’t supposed to leave my room,” she said. “No TV, no phone, no texting, no computer, no music, no socializing, no lights. It was literally nothing.”

In order to return to practice, she had to go through daily evaluations, in which she had to reach an ultimate score of zero to be considered recovered and ready for gymnastics again.

“I got released and the first two days were just getting back into the swing of things,” she said. “I progressively got back into things. Vault was the first thing I got back on. I missed three meets, and at the last away meet [against Northern Illinois] I did vault and warmed up for floor, but didn’t compete in it.”

Now, Mims is pushing to regain her spot in the lineup, practicing and competing with as much focus as she can.

Flashes head coach Brice Biggin said due to her concussion, there is not much that she can do other than wait. But Biggin hopes they can utilize her skills on a few events.

“It’s really just a matter of her gaining her confidence and endurance back and getting the numbers done,” Biggin said. “But where she gets back and how far, that’s a good question because we’re running out of time.”

The season is almost over for the undefeated gymnasts, who were recently ranked No. 17 nationally, but Mims is still going to fight for her lost spot.

“I definitely want to get back,” she said. “I like vault and floor, those are my main events and my fun things. Beam has been, at least this year, a little bit of an issue, but I know that they need me to either be there to push for a spot in line-up or be there to push the girls that are already in the line-up. It’s motivating all around.”