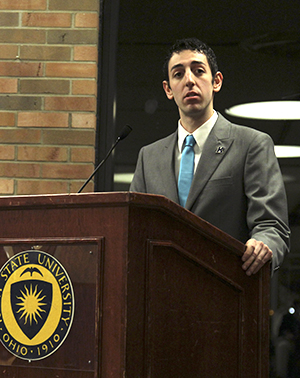 Various candidates running for positions in Undergraduate Student Government answer questions during the public election forum on Thursday, Feb. 28. Erik Clarke is running against Amish Patel for the position of Executive Director. Photo by Melanie Nesteruk.

Two men have been duking it out for votes to be executive director of the Kent State University Undergraduate Student Government, and Thursday night, both met to discuss why he should represent students.

Amish Patel and Erik Clarke have both been running their campaigns with social networking sites and leaving reminders on bulletin boards around campus. Thursday evening, their posts and posters took to having a real meaning.

“It’s time for me to give back to the university that has given me so much,” Patel said to lead off his speech to his fellow students. Patel has dedicated two years of commitment to USG by serving as the director of communication and as the current director of student involvement.

“Ultimately with my platform, I am going to gauge the students more,” Patel said. “As a student in communication, I really understand the importance of knowing my audience. So for me, it comes back to Kent State is my audience, and it’s finding what their best interest is and that way we can ultimately come back to have the experience be much better.”

Clarke stepped up to the podium with a message of values and equality.

“I’m here to stand up for students who don’t feel equal,” Clarke said as he addressed students with his vision of opening USG up more to the everyday student.

“We both have a very different vision for USG,” Clarke said. “My vision is much more collaborative. I believe that any student who wants to be involved with USG should have that opportunity. So any undergraduate who wants to get involved; who has an idea; who has a concern, should feel free to come to USG and join the ranks of USG.”

As a part of a plan to engage student involvement, Clarke said he plans to create a special committee to allow any student with a concern or idea to sit on a special board. While both used the forum to discuss their ideas for the year ahead, both echoed a competitive, yet entertaining campaign.

“Fortunately for me, I’m currently in an executive position. I’m chairman of the allocations committee, so I do have that experience,” Clarke said. “So I do think that gives me an advantage at that point. But running in this race is slightly more active than last, but also I ran in the most competitive race last year.”

Patel noticed a much different race as he has upped his ante this year with even more work and publications.

“In general, [because] I’m running for the executive director position, it’s a lot more competitive, it’s a lot more heated,” Patel said. “In terms of sheer promotions, I’ve put a lot more out there than in the past. This year I have a site, buttons, stickers — the whole nine yards.”

While Clarke and Patel are running for the head position of the USG, all seven other directors’ positions are wide open.

No position will be tighter than the director of government affairs with three students running to be the representative. All three candidates, Joseph Bizjak, Joseph Brown and Chris Clevenger, have a political science background and are all running with some very different ideas.

Bizjak currently works as the residence hall senator and is running to increase student voting by working to get free ballots to every registered students. Clevenger vows to make grants more aware to students who are eligible.

Brown said he plans to get Kent students more involved by having town halls and open forums with current Kent council members.

Only a few days remain until Tuesday’s election, and the one constant among all of the candidates was how eager candidates are to hear ideas and criticisms from any student.

To read their profiles, along with the profiles of other USG candidates, click here.

“While I was Director of Communication, we wanted to increase [how] USG’s went about broadcasting news and information, but as the director of student involvement, I went in and changed how things were [perceived],” Patel said. “This is to benefit and actually help [students’] Kent State experience.”

Patel has also served in the director of collegial relations in the Ohio Student Government Association. He said he has worked first hand to get lower rates for students to attend college.

“Right now, the thing we’re tackling is affordability for our students,” Patel said. “That’s something, as executive director, I will further do. I will actually be the main contact point and legislature for us, so then at that point I will be working even further with them.”

“I’ve put so much time and effort into USG that it’s more of a love for me, and it’s something that excites me,” Patel said. “Because of all I’ve done, I’d really like to see a legacy come into full fruition.”

For this past school year, Erik Clarke has acted as the director of business and finance on the Undergraduate Student Government board as well as being the chairman of the student organization allocations committee. Clarke also works with the city of Kent doing income tax review, storm water review and redistricting and building appeals.

“Some of my chief accomplishments have been simplifying the allocations process, sending more students to conferences than ever before, making the process more efficient, and making me more accountable to students,” Clarke said. “I’m the only candidate with executive experience for this position.”

Aside from his work in the past with USG, Clarke said, if elected, he has several goals in mind to open USG to students, in order to get more ideas accomplished through what he calls “active street teams.” The idea behind this is to send out representatives to find out what everyday Kent State students think needs to happen at the university.

“We should open USG up to every student who wants to get involved through new committees and the establishment of an active street team,” Clarke said. “Let’s foster the growth of a cooperative Kent State community, so we can all work together to solve the issues facing us as students and create new opportunities.”

Clarke also plans on working closer with businesses downtown to create more internships close to campus and to embrace the bond between the university and campus. Clarke also wants to work with the Kent State library to “lessen the financial burden on students.”