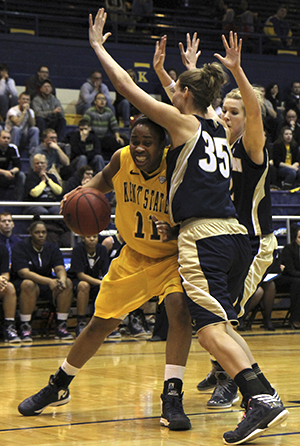 Senior forward Diamon Stubbs muscles her way through two defenders during a 77-71 home loss to Akron on Saturday, Feb. 23, 2013. The Akron Women's Basketball team completed its first sweep of Kent State in school history with the win. Photo by SHANE FLANIGAN.

Kent State played against rival Akron Saturday afternoon, performing well in all areas of the game — but the Flashes still came up short.

Kent State shot 44.8 percent from the floor and outrebounded the East division-leading Zips 17-12, but senior Trisha Krewson made it clear that there is still plenty of room for improvement.

“We are never satisfied with a loss, so we are just going to take the good things that we did from this game, take the positives, and use them against Miami on Thursday,” Krewson said.

The Flashes came out firing, grabbing a 5-0 lead with the momentum clearly swinging in their favor. The Zips were cold from the get-go, but quickly started to find the bottom of the net and came back to tie the game at nine with 15 minutes left in the first half.

Jamie Hutcheson closed out the first half with a last second 3-pointer to send the Flashes into the locker room with a little bit of confidence, trailing 31-25.

Though the Flashes came out shooting in the second half, they would never take the lead back from the Zips. Rachel Tecca led Akron with 20 points and hurt Kent State by getting into the paint.

“We had some mental lapses, but Akron is a very good basketball team,” Krewson said. “They are at the top of the conference and they are going to make plays like that; it’s how we bounce back.”

Kent State coach Danielle O’Banion was very happy with the way her team came to play compared to the first meeting between the rivals in January.

“We played at Akron a month and a half ago and quite honestly that was one of the worst basketball performances that I have seen from an effort standpoint,” O’Banion said. “That team that you saw today in the Kent State uniform is the team that we have been looking for.”

Tamzin Barroilhet led the way for the Flashes with 19 points and 12 rebounds, while playing a team-high 39 minutes. With all four seniors starting the game and playing 30-plus minutes, O’Banion is relying on experience to finish the season.

“We have asked the seniors in particular to extend their minutes,” O’Banion said. “We have to play that way unfortunately against teams like Akron who punish you for making one tiny mistake, so we are just working to find the most consistent line up.”

As the Flashes head to Oxford to take on Miami, they are taking away positives to apply to the rest of the season.

“We did a lot of good things today, but then there were a few little slips that we had that kind of cost us. I think we just need to focus on those and we are ready for our next opponent,” Barroilhet said.

O’Banion is encouraged by her team’s late-season improvement, and what it could mean when they face higher-ranking conferences foes.

“This team is still getting better and that is dangerous for teams like Miami and Buffalo at this time of the year,” O’Banion said. “They are not worried about Kent State.”