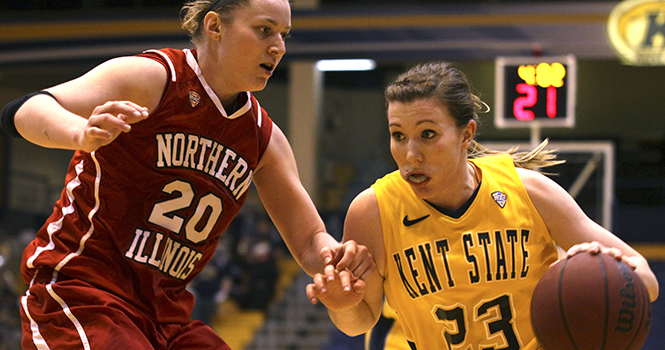 Sophmore Jamie Hutcheson dribbles past a defender from Northern Illinois. The Flashes remained close behind Northern Illinois for most of the game, but were unable to pull ahead. The final score was 52-47. Photo by Melanie Nesteruk.

The M.A.C. Center was a sea of pink Sunday afternoon as Kent State supported the “Play 4 Kay” Foundation in a battle versus Northern Illinois.

Kent State was not able to secure the win as Northern Illinois stayed composed down the stretch and defeated the Flashes 52-47 in front of 375 spectators.

The Flashes found themselves in the same situation as they were on Thursday against Western Michigan; a slow start to the first half followed by a late run into half time has plagued the team before. A loss of momentum in the second half ultimately cost Kent State the game Sunday.

“We have to challenge about how we start basketball games and then after that first initial media time out in the second half, those are the two lulls for us,” O’Banion said. “Some of it is practice planning and a lot of it is mental toughness and recognizing that those are crucial times for our team.”

Both teams got out to slow starts, with Kent State still in single digits with seven minutes left to play in the first half and Northern Illinois leading 17-8.

Kent State turned up the intensity, extending their man defense and forcing Northern Illinois into 11 turnovers in the first half. The pressure helped the Flashes enter half time trailing 22-19.

Senior Tamzin Barroilhet found success attacking the block, scoring seven in the first half. She believes that, as a team, they are close to playing what she calls “Kent State basketball.”

“That is one of the frustrating things about tonight was that we came close,” Barroilhet said, “we had a couple relapses where we weren’t showing Kent State basketball and that cost us some baskets down the stretch.”

Both teams came ready to play in the second half, upping the tempo and physical nature of the game significantly. Though there was plenty of tough defense, the Flashes could not convert on the offensive side of the court, shooting only 36 percent from the field.

Kent State took their first lead 29-27 with 12:40 left to play. A 3-pointer by Northern Illinois’s Amanda Corral put the Huskies back up 31-29. Corral was the go-to scorer for the Huskies, finishing with 16.

Northern Illinois, which was also searching for its second conference win, had early problems adjusting to the increase in tempo, but was able to keep composure late in the game.

The Flashes made 88 percent of free throws to stay in the game, which is a big improvement from the Western Michigan game, in which they struggled and made just 6 of 15 attempts.

Kent State has five days off before traveling to Toledo on Saturday. Toledo is currently leading the MAC West division, is 8-1 in the conference and riding an eight-game win streak.

O’Banion knows that they will have to prepare all week to get ready to compete.

“This is our last chance to take a breath before we make a push for six games,” she said. “They [the team] are plugged in and they are excited as anybody to go to Toledo next Saturday. We are not going to prep any differently, fully expecting [to] go there and play the game of our lives because we’ve worked and worked and worked to play a 40-minute basketball game of Kent State basketball.”