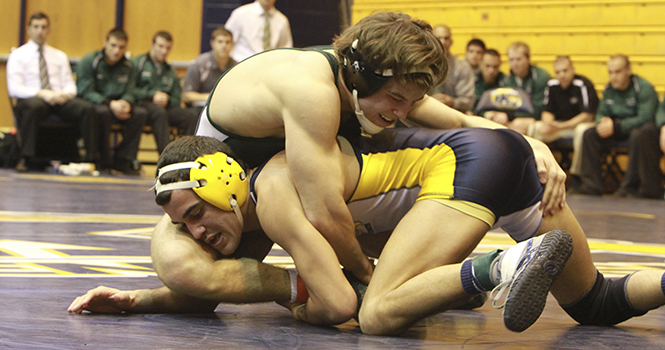 Stevie Mitcheff, a senior on the KSU wrestling team, he finished with a 11-5 victory over Ben Willeford (CSU).Kent State defeated Cleveland State 31-10 on Friday night at the M.A.C Center. Photo by Yolanda Li.

On Senior Night in front of 2,635 cheering fans, the Flashes wrestling and gymnastics teams both triumphed in their historic “Beauty and the Beast” event Friday.

Ranked No. 21 in the nation by InterMat, Kent State (9-5, 4-1 Mid-American Conference) easily rolled over Cleveland State (3-8) 31-10 at the M.A.C. Center for the Flashes’ ninth-straight victory over the Vikings.

Kent State wrestling head coach Jim Andrassy enjoyed the Beauty and the Beast event and said it was a great event for the wrestling and gymnastics teams and the fans.

“It was a great success, huge crowd, and it was probably a match where we wouldn’t have got a whole lot of people,” Andrassy said. “It worked out and we got a big crowd for it.”

The Beauty and the Beast event kicked off by honoring the six Kent State senior wrestlers, who walked onto the mat with their parents as their names and career statistics were announced over the speakers. The seniors honored were Stevie Mitcheff, Troy Opfer, Tommy Sasfy, Casey Newburg, Dustin Kilgore and Keith Witt.

Newburg reflected on his time as a Kent State wrestler and described his Senior Night as being simply “awesome.”

“I’ve never wrestled in front of this big of a crowd at Kent State, so it was just a great sendoff for Senior Night and I couldn’t be happier,” Newburg said.

At 125 pounds and 133 pounds respectively, No. 33 Stevie Mitcheff and Mack McGuire got the Flashes off to a hot start. Mitcheff, who returned Friday after dealing with an illness last weekend, came back strong and defeated his Cleveland State opponent 11-5. Mitcheff was happy to be feeling better and back on the mat.

“I definitely felt the time off I had, and I felt kind of weak and lethargic, but all in all I wrestled pretty well,” Mitcheff said.

McGuire converted three takedowns in the first period on the way to finishing his opponent 9-5.

After the matches at 141 and 149 pounds, the Flashes lost the lead; however, streak of six wins began at 157 pounds when Sasfy came away with an 8-4 victory over Cleveland State’s Matt Donohoe. With the match tied at four in the early going, Sasfy escaped and countered a Donohoe shot for a takedown.

Sophomore Caleb Marsh (165 pounds) gave Kent State the lead back with a 3-1 victory over Corey Carlo. Andrassy said Marsh continues to be successful this year, but still has work to do.

“I beat in (Marsh’s) brain that he had to come out and score points,” Andrassy said. “He’s very intense, he’s got great defense, he scrambles great. Right now he’s lacking going out and scoring points, and until he does that, he’s gonna struggle.”

Kent State began to dominate the competition when No. 26 Wheeler and No. 16 Newburg stepped on the mat. Wheeler’s five-point, 20-4 technical fall win gave the Flashes some breathing room. Newburg said he was happy with his own performance, as well as the team’s performance.

“I went out and I just pushed the pace of the match like I’ve been doing this whole season,” Newburg said. “(The team) came out in front of a big crowd and really performed well, so it was a good night.”

Newburg came on after Wheeler’s controlling performance and matched it by scoring an 18-3 technical fall win of his own.

Fans who were excited to see 2011 NCAA National Champion Dustin Kilgore wrestle went home a little disappointed. Kilgore won the match, but not in a way the fans would have liked to see.

Realizing that they were down and fearing what Kilgore might do on his Senior Night, the Vikings forfeited the match at 197, leaving with nothing to do but smile and wave at the crowd that came to see him.

Witt (285 pounds), whom has been the key closer for the team these past few weeks, wrapped up the event for the Flashes with a 11-6 victory over Riley Shaw. Witt, who has been improving as the year has gone on, feels confident in his ability to close out matches for his team.

“I think my team’s confident in me, so it gives me confidence in my wrestling,” Witt said. “I’m just thankful that I’m wrestling. It’s been my whole life.”

The Flashes wished to carry the same energy they had Friday to McComb Fieldhouse Sunday in hopes of upsetting No. 16 Edinboro (9-4), but a couple of overtime matches went in the Fighting Scots’ favor, allowing them to squeak by 20-19.

Each team won five matches and each earned bonus points in three matches, but an Edinboro pin at 133 pounds by No. 3 AJ Schopp made the difference in team points.

Andrassy said it gets frustrating with his team at times because it is “like watching two different teams.”

Mitcheff and Newburg each comfortably claimed major decisions for Kent State this weekend, completing 2-0 weekends. Mitcheff is now 24-10 on the season with four major decisions.

Newburg improved his season record to 31-5 with his 14th bonus-point victory of the season. Newburg is sixth among all-time KSU wrestlers with 116 victories in his collegiate career.

Marsh and Wheeler also completed 2-0 weekends Sunday, each scoring 3-2 victories over their Edinboro opponents. Marsh is now 19-7 and 9-4 in duals. Wheeler’s record is an impressive 23-9 with 7 major decisions.

The first overtime bout came at 157 pounds, when Sasfy and Casey Fuller of Edinboro were deadlocked at 10-10 after three periods of regulation. The tie broke when Fuller scored a takedown, which took gave the Scots a commanding 17-4 lead until the combination of Marsh, Wheeler, Newburg and Kilgore gave Kent State four straight wins.

“At 157, we pretty much gave the match away,” Andrassy said. “Tommy’s way better than that, if he wrestled that guy 10 more times, Tommy beats him. But the one match that counted, he didn’t win, and that’s frustrating.”

At 197 pounds, Kilgore did everything to his opponent but pin, earning a 16-1 technical fall over Warren Bosche at the end of the second period. Kilgore improved to 34-0 with his 27th bonus-point victory of the season. He extended his NCAA winning streak to 53 matches and his dual winning streak to 63 matches.

Stuck at 16 pins on the season, Kilgore is still chasing Jim Swetter KSU record for most pins in a single season (17). Kilgore already holds Kent State’s career record for pins (48) and victories (168).

In the final match of the day at 285 pounds, eight minutes were not enough to decide a victor. A buzzer-beating reversal by No. 19 Ernest James of Edinboro gave him a 4-2 win over Witt and a one-point victory to the Fighting Scots. Andrassy praised Witt for his hard-fought match and effort and never doubted his heart.

“For (Witt) to take in into overtime, I thought he fought really hard and did everything he could to squeak out a win,” Andrassy said. “He cam pretty darn close and I’m proud of the way he fought. If everyone would have fought as hard as Keith Witt did, we would have won that dual.”

The Flashes return to action Sunday, hosting Oklahoma State, Wisconsin and Northern Iowa in the NWCA Duals Regional at the M.A.C. Center. Pairings for the dual tournament will be announced on Tuesday.