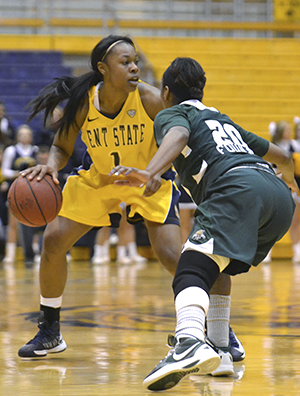 “We did not deserve to win tonight because we did not respect details,” O’Banion said. “That is the difference between a not-so-good team and a good team is that you don’t leave any detail to chance.”

Kent State was unable to gain a second win in the Mid-American Conference and sweep Ohio as 250 fans watched the Flashes shoot only 37 percent from the field.

Kent State (3-22, 1-11 MAC) came out looking calm and composed in the half court, getting the ball inside for easy looks at the hoop. The Flashes gained a small lead but were unable to stop Ohio on the offensive end.

Ohio (6-18, 1-11 MAC) matched Kent State shot-for-shot throughout the first half, making a large majority of their shots and giving Kent State little room for error. Both teams were neck-and-neck in both rebounding and turnovers, but the main differential was poor shooting.

“If you were not at the game, it’s hard to figure out what happened,” said O’Banion. “But when you get down to it, when you let their best 3-point shooter go 5-8 from the 3-point line, you don’t deserve to win.”

Ohio’s Erin Bailes was unstoppable from the 3-point line especially in the second half, finishing the game with 24 points and four rebounds. Senior Diamon Beckford knew that her presence was causing issues defensively.

“They bring her off a lot of screens, which we practiced how to guard,” Beckford said. “We just lost track of the game plan a little bit and got hung up on a couple of screens, which got her some open looks and we can’t let that happen to a great shooter.”

The Flashes stayed even with Ohio on the boards and forced the Bobcats into 17 turnovers. Kent State was able to keep possession of the ball with a season low 12 turnovers, but could not turn those into points.

Senior Tamzin Barroilhet finished the game with 15 points. She believes that her team is capable of picking up some of the workload.

“I know that I am a leader for this team and if we haven’t been scoring in a while, then I know that I have to step up and find a way to score or get an open shot for someone or get fouled just so that the momentum goes in our favor,” Barroilhet said.

The Bobcats pulled ahead with 5 minutes left in the first half to take a three-point lead until junior guard Ashley Evans hit a 3 to tie it back up at 20. A missed layup by Kent State followed the Flashes into half time as they trailed 24-21.

Ohio dominated the start of the second half forcing the Flashes to play catch up for the rest of the game.

“Five of the first six possessions for OU, they scored, and I think they made four 3s,” O’Banion said. “The game kind of got away from us a little bit.”

Looking forward to rival Akron coming to the M.A.C Center on Saturday, the motivation to improve is evident in the eyes of both senior players.

“It’s a rivalry,” Barroilhet said. “We have to come with a different face and a different mind set than we did tonight to be competitive with them.”

With Akron leading the MAC East and winning five of the last six games, O’Banion knows that though the motivation is there, the Flashes need to be ready to play.

“They are a very talented and dynamic basketball team that plays up tempo,” she said. “It will just be a matter of fine-tuning some things because we have added some wrinkles, as have they since our first meeting, but motivation, that will be the seniors’ job.”