Kent on top of snow shoveling 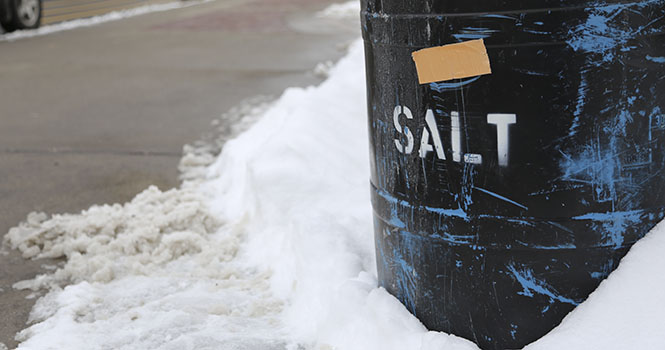 A drum of salt sits next to a cleanly shoved sidewalk leading up to Franklin Hall on Feb. 6.

In the city of Kent, business owners and homeowners are required by law to remove snow and ice from their sidewalks. It is also illegal to push snow into the street and block the sidewalks, according to Kent City Ordinance 521.15.

For those who violate the ordinance, there is an initial civil fine of $100 and a delinquent fine of $200. There is also a collection fine of $300 if the snow or ice is not cleared, as mentioned in the ordinance.

After local business owners and residents weren’t taking responsibility for shoveling sidewalks, Kent resident Mike Pritt founded the Snow Shoveling Initiative during winter 2010-2011. Although the snow hasn’t been bad this year, he said he is prepared to go out when necessary.

“The older and younger people had a hard time getting around and it was just an accident waiting to happen,” Pritt said. “We talked to some of the folks at city hall, and there is some legislation for snow shoveling, but hasn’t really been implemented.”

Snow trucks block sidewalks when they plow, so Pritt went out with his two sons to start shoveling. Pritt then used Kent Patch to ask for more help, but did not receive a big turnout. Living on Crain Street, Pritt said that more than half of the neighbors help shovel each other’s sidewalks and take turns to go out periodically.

“It doesn’t even have to be hours on end, it even just helps if you go a little bit at a time,” he said.

Planning for the next winter begins in October. Pritt said he and volunteers start early to know their roles and prepare for the first snowfall.

“We like to be the neighbors that you want to live by,” he said. “We like to be involved in the community, and people were receptive and thankful.”