“Are you the guy that gets naked on stage?” 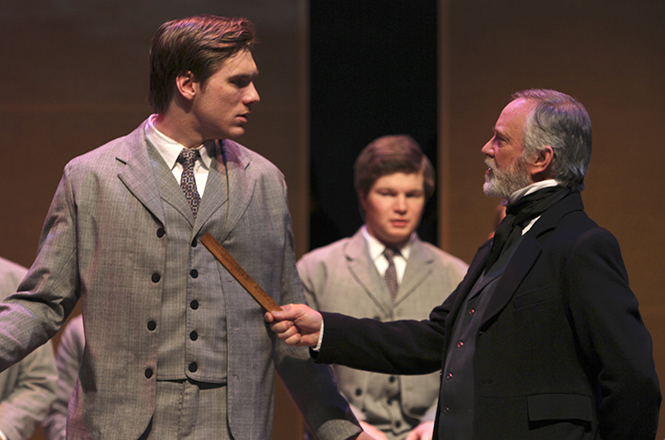 Michael Glavan (left) and Greg Violand (right) peform on stage during a dress rehearsal of "Spring Awakening" Thursday, Feb. 14. Directed by Tony Award winning Michael Rupert, "Spring Awakening" will run from Feb. 17 through Feb. 24 at the E. Turner Stump Theatre in the Music and Speech Building and is part of the Kent State University Roe Green Visiting Director Series. Photo by Shane Flanigan.

As part of the Kent State University Roe Green Visiting Director Series, Kent students will perform “Spring Awakening” at the E. Turner Stump Theatre in the Music and Speech Building Feb. 15 to 24.

Michael Rupert, who won a Tony Award for Best Actor in the 1986 revival of “Sweet Charity,” will direct the show.

“Spring Awakening” is based on the play with the same name written by Frank Wedekind.

“You’re not walking in to see ‘Hello, Dolly,’” Rupert said. “It’s about teenagers and their sexual and spiritual awakening.”

The show is set in late 19th century Germany. It focuses on first love, passion and coming-of-age. Rupert said the show exists in two worlds. One is lantern-lit 1892 Germany, and the other is an “electric neon song world” where characters can be expressive.

Audience members may want to note it contains mature themes.

Rupert said teens in 1892 and teens today in 2013 still grapple with fitting in with their sexuality.

“Stiefel is a young man with questions,” Markowitz said. “He is a very confused and eager young man who wants to know more. The only true friend and companion that he feels comfortable enough to be himself around is Melchior.”

“As life gets worse, Moritz becomes more disheveled,” said Markowitz. “In the end, he’s happier. And it’s reflected in his appearance.”

Rupert described the character of Moritz as “a person who doesn’t fit in, no matter how hard he tries.”

Markowitz said he has gained a lot of tips and knowledge from working with Rupert. Given the mature themes and content, Markowitz received advice from Rupert on how to handle an intimate scene.

“I always get asked, ‘Are you the guy that gets naked on stage?’” Markowitz joked.

Markowitz said it is a boy meets girl, boy gets girl, boy loses girl story, but that it isn’t what the audience thinks.

Kent’s version of the show will only have minor changes. For example, the Broadway version had several actors seated in the audience, unlike Kent’s version.

“There’s a moral lesson seen in how these characters treat each other,” Markowitz said. “I want the audience to leave with a better understanding of who we are and where we fit in.”