Another heartbreaking loss for the men’s basketball against Ohio 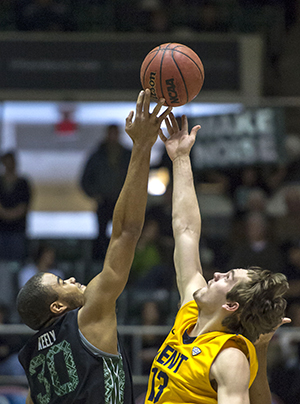 Ohio's Reggie Keely narrowly wins the tip off against Kent State's Mark Henniger at the Convocation Center in Athens, Ohio on Saturday, Feb. 16. The Flashes lost to The Bobcats in overtime, 78-75. (Jason E. Chow

Facing a 15-point deficit midway through the second half Saturday against Ohio, the Kent State men’s basketball team appeared it would fall short of avenging its earlier loss to the Bobcats from Jan. 26. The Flashes were resilient, however, finding a way to fight back into the game and tying up the score to send the game into overtime.

After both teams battled each other for 45 minutes, a single possession proved to be the deciding factor in the game. Unfortunately for the Flashes, they weren’t on the receiving end of it.

When Ohio guard Stevie Taylor hit a 3-point shot with 13 seconds left in the overtime period, the Bobcats halted what was an improbable comeback by the Flashes and came away with a 78-75 victory Saturday in Athens, Ohio, to move to 10-1 in the Mid-American Conference.

Kent State (14-12, 5-7 MAC) matched the Bobcats shot-for-shot throughout the later part of the second half and overtime, similar to the way the Flashes played in their 69-68 loss to the Bobcats earlier in the season. The Flashes played hard in both games only to come up just short when the clock hit zero. Head coach Rob Senderoff said he felt Saturday’s game was yet another winnable one.

From the early onset of the game, it seemed the Flashes would be up to the challenge of facing one of the top teams in the conference. Kent State built a 7-point lead with about five minutes to go in the first half behind solid play from senior forward Chris Evans and junior guard Bryson Pope.

The Bobcats soon gained control, forcing the Flashes to turn the ball over eight times and converting many of those turnovers into points. Senior guard D.J. Cooper gave the Bobcats the lead on a 3-pointer with two minutes left in the first half and nailed another 3-pointer to beat the buzzer at the end of the half as Ohio took a 31-26 lead into the locker room at halftime.

Junior forward Darren Goodson said there needed to be a change in the team’s attitude and approach once the game shifted to the second half.

“The reason they were up on us was because we played selfish basketball in the first half,” Goodson said. “We came back later in the second half and played better.”

While the Flashes did come out playing more aggressively as the second half began, it didn’t immediately lead to success. Ohio forced Kent into four straight turnovers to open up a 46-31 lead with about 15 minutes to go in regulation.

As the game moved late into the second half, the Flashes started to make their rally. A 3-pointer by senior guard Randal Holt and a two-handed dunk by Evans on the fast break led the team on a 12-0 run, capped off by a short jump shot by junior forward Mark Henniger to give the Flashes a 62-61 lead.

The two teams traded leads over the span of two minutes until the score was tied at 69. The Flashes had an opportunity to regain the lead, but a miscommunication caused Henniger to throw the ball out of bounds with four seconds remaining.

Ohio received the ball back, and Cooper had one last chance to break the deadlock before overtime would begin. His half-court heave at the buzzer nearly went in, rattling around the rim and falling out as regulation time expired.

The game shifted to the extra session, and Evans put the Flashes on the board first with a tough layup while drawing the foul. Evans, who finished the game with 18 points and 13 rebounds, missed the free throw after the shot, and the Flashes’ lead remained at two.

A jumper by guard Walter Offutt and a free throw by Cooper gave the Bobcats a momentary lead, but Evan tied the game once again with another strong two-handed dunk. Sophomore guard Kris Brewer made two trips to the free throw stripe in the closing minutes of overtime, but made just two of his four foul shots, his two misses adding to the team’s 11 missed free throws for the game.

With the score at 75-73 and Cooper out of the game with five fouls, the Bobcats had the ball in their possession with 25 seconds remaining in need of a big score. Ohio worked the ball around the perimeter after a time out and got it into the hands of Offutt. When Brewer ran over to help Holt on defense, Offutt swung the ball over to the right wing and into Taylor’s hands.

The uncovered Taylor, who had not made a shot all game, squared up and knocked down the clutch 3-pointer, and suddenly the Bobcats found themselves ahead by a point. Senderoff said the team made a mistake with its defense rotation on that shot.

“There was a timeout called, and we wanted to not leave our men or give up a 3,” Senderoff said. “We messed it up. We allowed Stevie Taylor to get open. I’d rather they not get it off and have Offutt try to finish in traffic.”

The Flashes, not taking their last time out, brought the ball up the court with Holt at the helm. But the Bobcats double-teamed Holt at the other end and forced him into an errant pass, which led to a fast break layup by guard Nick Kellogg to push the lead up to three points. A last-second desperation shot by Evans at the buzzer missed the rim entirely, and the Bobcats began their celebration.

Senderoff gave Taylor much credit for having the ability to step up with the game on the line and hit such a big shot under pressure.

“I’m guessing it’s the biggest shot of his career,” Senderoff said. “Great shot by him, great play by him.”

Goodson said this game and the result of it was just a case of the Bobcats staying one step ahead of the Flashes.

Despite another loss to a top-division rival, Senderoff remains confident that the Flashes are able to be competitive against high-level conference talent based on their performance in this game and other close games they’ve had this season.

“We can compete with a lot of teams in the league,” Senderoff said. “[The Bobcats] are an excellent team. They are great at home and they are very well coached. They’ve won 18 games. But we feel we can play with anyone.”