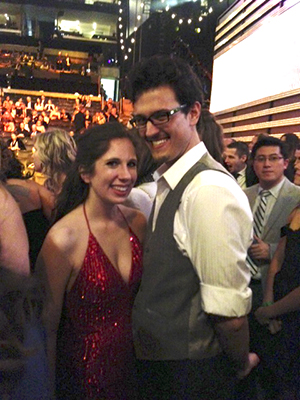 Angela Pino and her date enjoy the Grammys.

I was jarred out of my restless sleep at 12:25 p.m. as my flight landed back in Cleveland. I tried to process what had been real and what had been a dream. Had Nick Cannon really been on my first flight? But, more importantly, less than 16 hours ago, had I seriously been at the Grammys?

When people used to ask me what I wanted to be when I grew up, I simply replied with, “Famous.” I didn’t care if I was a singer or an actress – I just wanted the spotlight. Some of my earliest memories revolve around music. My dad and I would drive 45 minutes out of the way to “get gas,” when we were actually just driving around listening to Alanis Morissette or George Thorogood. I’ve always hoped to one day go to the Grammys, and that one day happened this year when my dad’s coworker happened to have some tickets for the mosh pit.

My date and I arrived at the Staples Center parking lot check-in at 12:45 and got our green Grammy wristbands. I’m not sure if I’ll ever take mine off. We were told we could walk around the area but had to be back by 2 p.m. to walk to the Staples Center. Once we were all back, we lined up in a single file line according to the number on our wristband. I was 29. We joked with other people in line that we felt like we were in preschool as we were lead to the venue and all we needed was a rope to hold onto.

The entrance security was nowhere near as rigorous as I’d expected. All we had to do was walk through a metal detector. They barely even checked the purses that some people brought. After we all got through, we were taken to a holding area and told we were allowed to go to the restrooms and get concessions but to be back by 3:30. I found a merchandise table and happily made my way over there. Even though I was back to the holding area by the given time, we didn’t head in until after 4. The reality of the situation didn’t start to sink in until I walked on the stage to get to the mosh pit.

The arena stayed fairly empty for a while, and “The Big Bang Theory’s” Kaley Cuoco was the first celebrity I saw. It took a while for the rest of the audience to show up, and even at 4:45, with 15 minutes until show time, the place was still pretty empty. As Katy Perry walked to her front row seat less than 20 feet from where I stood, we hollered and waved at her. She responded by making a face at us then smiling and returning the wave. She was seated next to Allison Williams from “Girls.” Ellen DeGeneres and Portia de Rossi, who looked miserable the whole time, were seated just down the row from them. The mosh pit went crazy as the always-dapper Justin Timberlake walked in with Jessica Biel. He smiled at us and we all swooned and started giggling. The newlyweds were adorable. Justin always had his arm on Jessica’s leg and she had her arm wrapped around his. They were seated next to Jay-Z and Beyoncé, who also waved at us. Before we knew it, performers were taking the stage getting ready for Taylor Swift’s performance of “We Are Never Ever Getting Back Together.”

Album of the Year: Mumford and Sons – “Babel”

Record of the Year – Gotye ft. Kimba – “Somebody That I Used to Know”

It was fun to see the celebrities singing along to the performances. Katy Perry sang along with Fun., Ellen DeGeneres knew every word to The Black Keys’ performance, Taylor Swift sang and danced to The Lumineers and Miranda Lambert fist pumped during Kelly Clarkson’s rendition of “Natural Woman.” Some of the performers had their own lyrics in the teleprompter.

The commercial breaks were chaotic but so much fun to watch. As soon as the show went to break, celebrities greeted each other and took pictures. During the first commercial break, Taylor Swift ran to Lena Dunham and gave her a hug. Kelly Clarkson sat behind Ellen and they were always talking during breaks. During one of the breaks, a group of us from the pit hollered to Ellen and we talked with her. We invited her to come dance with us in the mosh pit and she said she wanted to, but said we should do the dancing while she sat in her seat. The commercial breaks also served as a time for the presenters to move from their seats to the stage. Kat Dennings from “2 Broke Girls” used that opportunity to practice walking down the stairs a few times in her heels. She looked over at us and told us she hoped she didn’t fall. Also during the commercials, performances from previous shows were aired. We were given a 35-second warning before coming back live and then they counted down from 10 and instructed us to “applaud for the Grammys.”

While it never got really got hot in the pit, standing for more than 7 hours made us tired and all our screaming made us hoarse. Luckily after Rihanna’s first performance, the workers handed out water. We sipped on water during the commercial while Beyoncé snacked on Sour Patch Kids.

Many of the celebrities left before the award show was over and Kelly Clarkson gave Ellen DeGeneres a huge hug before leaving. Katy Perry and John Mayer stayed the longest, right up to before the finale number. Then, before I knew it, the show was over and we were back to our car by 9 p.m. I didn’t realize just how tired I was until I sat down in the car to go back to my date’s house. We stopped at In-N-Out for burgers, fries and shakes and ran into other people from the mosh pit. We took our order to go so we could go back to my date’s house and watch the rest of the Grammys, since they were on a time delay in Los Angeles and didn’t air until 8 p.m.

As we watched the show end for a second time, I gathered my suitcase and headed to the airport to catch my red-eye back to Cleveland.