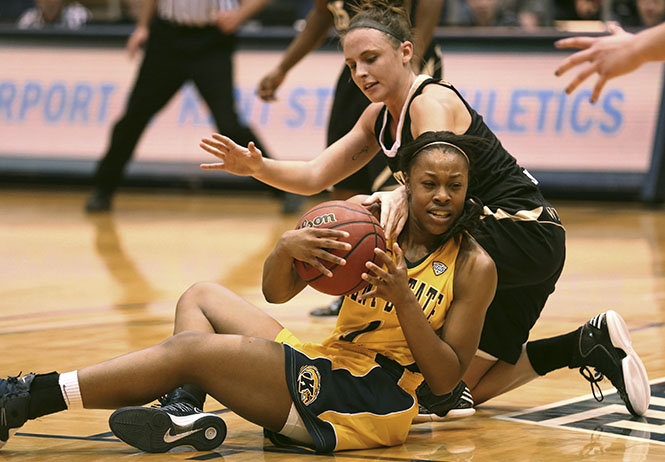 Freshman Ashley Evans keeps the keeps a loose ball from Western Michigan guard A.J. Johnson in the MAC Center on Feb. 7. The Lady Flashes fell to the Broncos 40-58. Photo by Brian Smith.

The Flashes were not able to defend their home court in a 58-40 loss to Western Michigan in front of more than 400 fans at the M.A.C. Center.

Flashes head coach Danielle O’Banion was unimpressed with the way her team came to play.

“Tonight was unfortunately a typical game performance in the first half,” O’Banion said. “We got off to a slow start and really didn’t put ourselves in a position to maximize the opportunity to compete.”

Shots suddenly began to fall for the Flashes as senior Trisha Krewson and sophomore Jamie Hutcheson came alive to go on a 12-0 run and bring Kent State within two points at halftime, 24-22.

O’Banion believed that they were very fortunate to be involved going into the second half due to the team’s poor play.

The Flashes came out strong in the second half, scoring three unanswered layups to take a 28-24 lead and forcing Western Michigan to take a timeout.

Western Michigan played an extremely physical game that frustrated the Flashes and allowed the Broncos to get to the free throw line frequently, where they shot 70 percent. A long string of unanswered shots allowed them to take a 48-43 lead, which Kent State could not challenge.

Krewson said the Broncos’ physicality affected the Flashes in the second half.

“We kind of got frustrated and we did some frustration fouls,” Krewson said. “We kind of let their physicality get the best of us, and we put them at the free throw line too many times down the stretch.”

A.J. Johnson led the way for the Broncos with 19 points. They were also able to outrebound the Flashes 45-37 and force 18 turnovers.

Looking forward to Sunday’s game against Northern Illinois, O’Banion is always proud of the way her team recovers.

“Our quest right now is for us to play 40 minutes of Kent State basketball because we haven’t put 40 minutes together,” she said. “Our preparation will not change.”

Northern Illinois will come into the M.A.C Center 6-16 overall, also looking for their second win in the conference. Tipoff is scheduled for 2 p.m. Sunday.