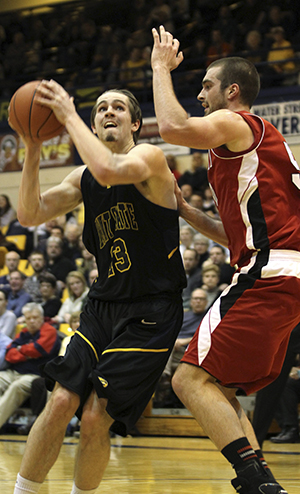 Junior forward Mark Henniger shoots the ball at Kent State's game against Miami on Feb. 13. The Flashes won with a final score of 87-70. Photo by Chloe Hackathorn.

The Kent State men’s basketball team – averaging 80 points per game over the course of the last three games – came into its game against Mid-American Conference rival Miami University RedHawks. The trend continued Wednesday as the team seemed to be completely in sync once again.

The Flashes ran away with an 87-70 victory over the Miami RedHawks Wednesday night in the M.A.C. Center behind another extraordinary overall shooting performance.

The team shot in the high percentages for a majority of the evening, finishing the game at nearly 58 percent shooting from the field and knocking down 10 3-pointers. Head coach Rob Senderoff said he felt a number of guys on the squad played well offensively and handled the RedHawks’ defensive schemes with poise.

“I thought we did a good job with their pressure, handling traps and the full-court pressure for the most part,” Senderoff said. “I felt that enabled us to get good shots, and we were fortunate that we were able to make them.”

Five players scored in double-figures for the Flashes (14-11, 5-6 MAC) to help propel them to their third straight home win, making them 9-6 this year in front of their fans in the MAC. Senior forward Chris Evans paced the Flashes with 22 points and 13 rebounds, his first game since spraining his right ankle in the team’s win over Central Michigan last Saturday.

Evans said he owes a lot to the trainers on the team for working on his injury early and getting him back to playing condition in time for Wednesday’s game.

“I’ve really been getting a lot of treatment this week,” Evans said. “Just coming in early in the morning before practice and working with it. I was feeling all right throughout the game. You don’t really think about your injury during the game. It hurts now, but I didn’t really focus on it too much.”

Evans scored 13 of his 22 points in the first half as the Flashes found their offensive groove early on in the game. The Flashes converted on six of their first nine 3-point attempts but still couldn’t seem to create space from the RedHawks, who trailed by just four points with six minutes left in the half.

Kent State then found the spark it needed after Evans followed up a layup with an alley-oop slam off of an assist by senior guard Randal Holt. From there on, the Flashes finished the first half on a 16-6 run to take a 48-32 lead into halftime.

Holt, who finished the game with 13 points, said that run before the half, coupled with the defensive pressure they applied, was huge for the Flashes as they tried to put the game out of reach early.

“That run kind of gave us a cushion to breathe a little bit,” Holt said. “You don’t want every game to be a close game. We stretched it out on them tonight, got a little lead on them and we played from there. We kept our intensity up, and we didn’t let them get back into the game.”

The team’s intensity continued on into the second half, and the Flashes were able to stretch their lead even further. A driving dunk by junior guard Bryson Pope pushed the lead up to 20 points, and a 3-pointer by Holt made the score 76-55 with seven and a half minutes remaining in the contest.

The Flashes kept the pressure up defensively as well, forcing the RedHawks into 16 turnovers that resulted in 22 points on the other end. Kent State came up with 11 steals in the game as well, led by Evans with four.

The team has focused more on the defensive end for the past couple weeks, and Evans said the Flashes have made a lot of progress defensively because of the extra focus.

“Since scoring hasn’t been a problem for us, we want to commit ourselves to the defensive end,” Evans said. “We wanted to really focus in on our rotations and trust each one another on the defense. I think we did a great job at that tonight.”

Senderoff said despite the Flashes’ solid defensive performances tonight, he still feels the team needs to get better in that portion of the game.

“There were certain aspects that I thought we’re OK,” Senderoff said. “We had a number of steals, which I thought was good. But we’re still fouling too much, and we’re not rebounding nearly as much as we need to. Against the teams that we’re going to be facing as we move forward, we’re just going to have to do a little bit better for longer periods of time.”

The Flashes were out-rebounded 35-26 by the RedHawks and committed 17 personal fouls over the span of the game.

Kent State has a rematch against division rival Ohio University looming over the horizon, and the Flashes must now start preparing for a road challenge against a team that beat them by just a point on their home floor a few weeks ago. Holt said the team is hoping to build off its recent momentum and use that to pick up some key wins before the conference tournament in March.

“That’s our big goal,” Holt said. “To get to playing our best basketball around this time, and play our best heading into the MAC Tournament. Hopefully we can get hot and do some big things up there in Cleveland.”

The Flashes’ next game against the Ohio Bobcats is scheduled to tip off at 11 a.m. Saturday in the Convocation Center in Athens, Ohio.