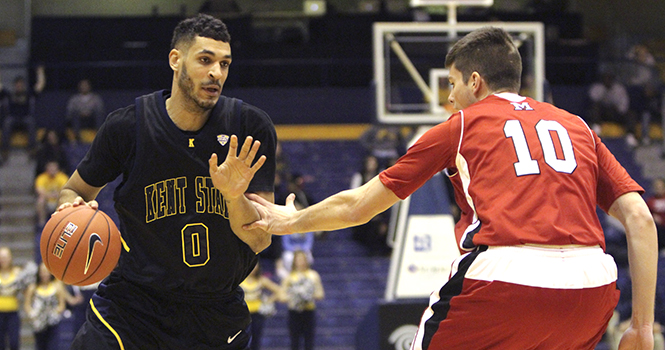 Junior guard Bryson Pope dribbles the ball down the court. Kent State wins over Miami University in an 88-70 Wednesday night in the M.A.C Center. Photo by YOLANDA LI.

Kent State competed in the final ESPN BracketBuster game in the 11-year history of the event, and the Flashes made the most of their chances in a come-from-behind effort.

Kent State (15-12, 5-7 Mid-American Conference) overcame an early first-half deficit and rallied for a 70-63 victory over the Loyola University Chicago Ramblers on Saturday in front of 1,915 at Gentile Center in Chicago, Ill.

Four players scored in double-figures for the Flashes, who shot 49 percent as a team for the game.

“It was good to get a win like that,” head coach Rob Senderoff said. “Whether it’s in the league or out of the league, it still feels good to get the win.”

The Ramblers took control of the game from the onset, due in large part to the performance of forward Christian Thomas. Thomas made his first eight shots, four of the eight in the first six minutes of the game, and out-hustled the Flashes’ defense early on.

Six straight points by guard Jordan Hicks made the score 20-9 in favor of Loyola before the 12-minute mark of the first half, leading to a Kent State timeout.

Kent State found ways of keeping the game close in the half and began gradually making a comeback. A quick 10-4 run cut the deficit to two points with 8:29 to go in the half, highlighted by 3-point shots from sophomore guards Kris Brewer and Devereaux Manley.

A jumper by junior guard Bryson Pope tied the game at 33 with a little more than two minutes left, and senior forward Chris Evans made a free throw to give the Flashes the lead. Evans ended the first half on an explosive note, scoring on a fast-break dunk and following up with a block at the other end just before halftime.

“During our week off, we had been talking a lot about the importance of finishing halves,” Evans said. “We didn’t play well in the first 15 minutes, so we wanted to finish the half on a good note. We really turned it up right before the half.”

Evans recorded his third straight double-double with 16 points and 10 rebounds, while adding three steals and a blocked shot.

The Flashes kept the pressure on the Ramblers as the second half began, eventually extending their lead to 11. For much of the second half, Kent State matched Loyola shot for shot, making it increasingly difficult for the Ramblers to get back into the rhythm they had in the first half.

Pope converted on a layup at the 11:40 mark in the half, giving his team a 55-45 advantage. After a 3-for-3 shooting performance in the game, Pope has now made his last 10 shots over the course of the last three games.

“Bryson has been playing better,” Senderoff said. “He is playing the way we expected him to play when when he first came here.”

The Ramblers tried to get back into the game as the second half went on and were able to cut the lead down to six on a couple different occasions. Back-to-back close shots by Thomas brought his team within eight points around the eight-minute mark, and Loyola’s defense managed to stop the Flashes on four consecutive possessions.

Brewer put the momentum back on Kent State with a 3-pointer make the team’s lead 11 once again. Senderoff said the shot was significant down the stretch.

“We didn’t do as well finishing the second half,” Senderoff said. “But I thought Kris Brewer hit a 3 when the game got tight that I thought was very important.”

Loyola brought the game within five points with 10 seconds left, but two late free throws by Holt ultimately sealed the win for the Flashes.

For Kent State, one of the main focuses over the last week was finishing strong at the end of both halves, and Evans said not having a game to prepared for in the middle of the week gave the Flashes more time to work on that.

“The last week off has really helped our bodies and helped us focus on some details, like how we play the last five minutes of each half,” Evans said.

The Flashes won’t have the same luxury this week, as they now must prepare for a home challenge against Buffalo at 7 p.m. Wednesday at the M.A.C. Center.