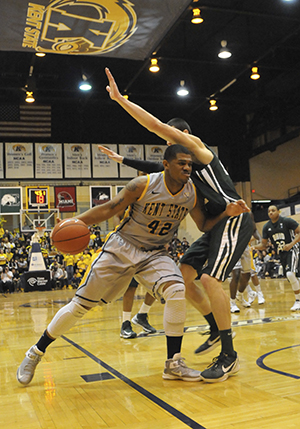 Kent State will help the Ramada Worldwide BracketBusters weekend event ride off into the sunset by participating in one final game.

The Flashes, one of only 10 schools to participate in every BracketBusters game since its inception in 2003, will travel to Chicago to take on Loyola University Feb. 23.

Kent State is 6-4 in BracketBusters games, intended to give mid-major schools a national stage less than a month before the NCAA Tournament selection, and lost to the College of Charleston 80-73 at home in last season’s game.

“It gives us another quality opponent from a good league,” Flashes head coach Rob Senderoff said Tuesday. “It gives us a chance to hopefully get another good win as we head into our conference tournament.”

Loyola of Chicago is 5-4 in BracketBusters games and defeated former Kent State coach Geno Ford and his Bradley Braves 66-54 last season. The Ramblers lead the all-time series with Kent State 3-1, with the last meeting between the two teams resulting in a 74-59 Loyola victory on Nov. 30, 1996.

Loyola currently holds a 13-10 overall record, including a 3-7 mark in Horizon League play. Senior forward Ben Averkamp leads the Ramblers with 15.6 points per game and 6.7 rebounds.

The abrupt stop in conference play for the annual game is surprisingly welcomed by Senderoff and his staff.

“We’ll prepare like any other game, but the league this year gave us a week off prior to that game,” Senderoff said. “I think what it’ll do is it’ll give us a little bit of a time to take a deep breath and get ourselves ready for the stretch run with that game being a part of that.”

Until that week, though, the Flashes will remained focused on the task at hand, which is competing against conference opponents.

“We won’t start preparing for them until the week prior,” Senderoff said. “But I’m a little bit familiar with them. We have a former player who’s an assistant coach there so I’m familiar with their program.”

That former player is Ramblers assistant coach Armon Gates, who started at guard for the Flashes and graduated from Kent State in 2006. Gates also served as an assistant under Ford from 2008-2010.

Unlike past seasons, Kent State will not look at the BracketBusters game as a potential launchpad into an at-large NCAA Tournament bid. The Flashes have struggled as of late, losing four of their last five, and currently hold a 12-10 (3-5 MAC) record with virtually zero chance of earning such a bid.

“I think this year for us, we’re going to have to win our conference tournament to have the chance to play in the NCAA Tournament,” Senderoff said. “But for some teams, it gives you a chance to get a resume-building win. I think it’s been helpful for a lot of teams of the course of time that’s being going on. If nothing else, it’s so difficult to schedule a game in a league like ours that it gives us a road game this year and they’ll have to return it to us two years from now and give us a home game a couple years from now. Sometimes, these games are just really difficult to schedule.”

The final BracketBusters weekend also includes Mid-American Conference members Ohio and Akron. The Zips will host North Dakota State at 7 p.m. Feb. 22 at James A. Rhodes Arena. The Bobcats, coming off a Sweet 16 appearance in 2012, will travel to Nashville, Tenn., to take on Ohio Valley Conference-member Belmont.

Game time at Loyola’s Gentile Arena has yet to be announced. Follow @TimmyD_DKS for the latest Kent State men’s basketball news.

Tim Dorst contributed reporting to this story. Contact him at [email protected]