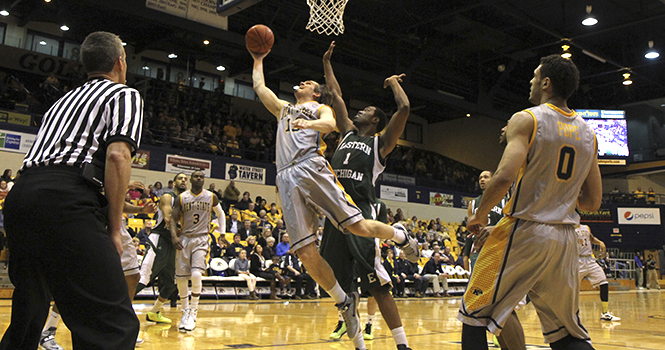 Junior forward Mark Henniger goes for a layup during a 77-62 home victory over Eastern Michigan Saturday, Feb. 2. Kent State improved to 12-10 on the season and 3-5 in the MAC. Photo by Shane Flanigan.

Leading into the game on Saturday, senior guard Randal Holt and the men’s basketball team had had its share of offensive troublers. Kent State dropped four straight games over the span of two weeks amid shooting struggles and a few heartbreaking losses in the final seconds of games.

The Flashes needed a strong performance against the Eastern Michigan Eagles to jumpstart them and get them out of their recent mid-season slump. Holt, who had been in a slump of his own, rose to the occasion, and not only did he provide the necessary spark for the Flashes, he reached a personal milestone in the process.

In Kent State’s 77-62 win over the Eagles Saturday night in the M.A.C. Center, Holt surpassed Trevor Huffman to become the all-time leader in three-point field goals in team history. It was a moment for Holt that he hadn’t quite grasped by the time the game was over.

“I don’t think it’s hit me yet,” Holt said. “I’m just blessed to be in this situation. To break a milestone that’s been held up for some years now, that’s an amazing feeling. I’m thankful to even be here and be able to do something like that. It just feels amazing.”

Holt scored 17 points and hit five three-pointers in the game, bringing his career total to 211. His record-breaking shot from the left wing, coming at the 11:34 mark of the second half, pushed him past Huffman’s mark of 210 that had stood since 2002.

Head coach Rob Senderoff said it was a very special night for Holt and for the team, and the fact that Holt was able to break through his own recent struggles to break the record made it even more special.

“He’s probably as frustrated as anyone that he hasn’t produced the way he would like and the way we all would like,” Senderoff said. “He hasn’t had the season that I’m sure he would like to up to this point, but I also think you have to remember the career he has had here.”

Setting the three-point record was an important step in Holt’s career, but he said it was more important to him that the Flashes were able to get the decisive victory over the Eagles.

“We had been on a four-game losing streak,” Holt said. “We all committed ourselves to do whatever it takes to get the win. We knew Eastern Michigan was a good team with great athletes and players, so we had to find a way to get this win. I’m just proud of our guys tonight.”

Kent State and Eastern Michigan started the game off trading baskets and keeping the score close until the Flashes broke the game open with a 9-2 run around the midway point of the first half. Holt and sophomore guard Kris Brewer hit back-to-back jumpers, and senior forward Chris Evans punctuated the run with a steal and a ferocious dunk on the fast break, two of his 15 points in the game.

After leading 32-26 at halftime, Kent State started the second half in similar fashion. Junior Darren Goodson scored four straight, and Holt followed with a pair of three-pointers in succession to extend the Flashes lead to 16.

Senderoff was pleased to see his players come out of the locker and get off to a fast second-half start, something that the team had struggled with in recent games on its home floor.

“The start of second halves at home, we have not been great at,” Senderoff said. “It’s not something we talked about at all, but I do think it was important for us for our six-point lead not to get down to one early on.”

A combination of solid defensive play and efficient shooting kept the Eagles at bay for much of the second half and allowed the Flashes to keep comfortable distance on the scoreboard. Kent State led by 21 points at one point in the half.

The Flashes shot 45 percent from the field Saturday night, which included a 6-for-13 shooting performance for Holt. After his 4-for-17 showing against Northern Illinois last Wednesday, Holt recalled meeting in the gym early Friday with Senderoff and Evans as the three of them held a shoot-around and worked on getting Holt’s trademark jumper back into form.

“Coach Senderoff has taken it upon himself to get in the gym with me,” Holt said. “I just got in the gym, tried to find a rhythm and get my confidence sky-high. Just get into a rhythm where it feels good when it leaves my hands. And obviously it worked.”

Senderoff said he organized the extra shoot-around with Holt and other players to show the trust that he has in his players and his willingness to do a little extra if it means helping the team improve in the long run.

“I’ve been very hard on these guys, and I think rightfully so,” Senderoff said. “But I also need them to understand that I’m in their corner. I wanted to make sure that it’s just not the assistant coaches that are getting shots up with them. I just think that was important for me with those guys.”

After the Flashes’ fourth consecutive loss last week, the motto of the team, Holt said, was “Enough is enough.” The team went into the game Saturday knowing it needed its luck to change, and the players took the necessary steps to get back on the winning side once again. Now, with the Flashes sitting at 12-10 and 3-5 against Mid-American Conference foes, Holt said the players need to buckle down as they prepare for a road challenge the Western Michigan Broncos Wednesday night and for the rest of their conference schedule.

“Things happen, and we can’t get those losses back,” Holt said. “At the end of the day, the only guys who can change what’s going on out there on the court are the guys in our locker room. Everyone who checked in tonight did great and helped us get the win, and that’s our biggest goal. To win as many games as we can and go into the MAC Tournament playing our best basketball.”