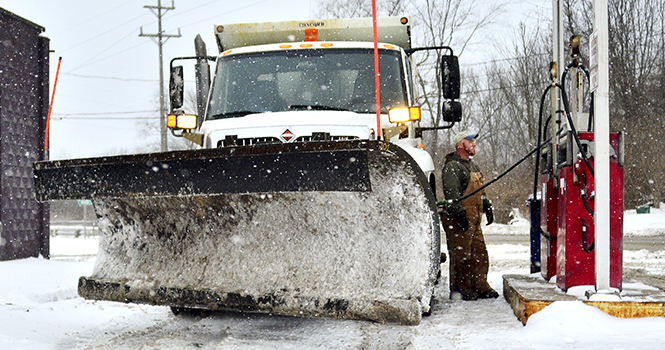 Kent officials are currently budgeting funds to prepare for next year’s winter weather conditions. With this job comes the responsibility of deciding how much money will be needed for snow removal.

The budget can range anywhere from $100,000 to nearly $350,000 depending on the inches of snow per year and the amount of maintenance needed.

A large portion of this money in the snow removal budget goes toward salt for the roads. The Kent salt dome holds upwards of 5,000 tons of salt and has 4,800 tons currently inside from last year’s tame winter.

“So far this year, we haven’t had an average snowfall. So, what we did was, we decreased our salt purchases this year,” Gene Roberts, Public Service Director for Kent, said. “We are committed by contract at minimum to buy 2,800 tons. If we already have 4,800 in the dome and then we order 2,800 more — we better use it all, or else we will have no where to put it.”

At the current cost of rock salt, the minimum amount would come with a price tag of $103,964.

According to Roberts, this is the first time they have had to face the potential of being in a position that requires them to purchase more salt than they are able to store. If extra storage room is not found, the extra salt may have to be stored under tarps near the salt dome.

Gerald Shanley, the city’s facilities manager, has been working with Kent for over 25 years and has first hand experience in dealing with the budget.

“We always hope to get the best bang for our buck,” Shanley said. “We try to do the best we can with the least amount of money. As far as the budget goes, those numbers are in place. It’s broken down in so many different lines — equipment repair, maintenance —there are so many areas there that need our attention.”

During budget meetings, Shanley and other managers discuss the dollar amount required to maintain roads during poor weather conditions, where exactly this money should be spent and what to do if there is excess.

The city puts excess money back into the general fund to be used for other projects. Last year’s short winter meant a surplus of $50,000, part of which went to cover the costs of a new asphalt-recycling program.

In longer, more severe winters, the city may go over the projected budget for snow removal. In this case, there are contingencies set into place. Roberts explains contingences to be like “a secret stash of money” (upwards of $100,000) set aside for emergencies.

“When this happens, we have to go back to council and show them what it actually costs to maintain everything,” Roberts said.

After Shanley and other managers discuss the budget, it moves up the line to Roberts who oversees Shanley and all the other divisions of public service, such as water treatment, the engineering division and much more.

“They look at it, I review it, tweak it, adjust it [and] beg for more money,” Roberts said. “And then it goes to the council who finally approves the budget. There are a lot of people, including our budget financing folks, that look at it and say, ‘We’re going to get this amount of money, and you want how much of it?’”

Winter weather is a guessing game with no predictable or concrete outcome. Roberts, Shanley and others do their best to look at past year’s average snow falls and also pay close attention to long-range weather forecasts.

The main thing to focus on, according to Roberts, is knowing when to actually use the salt and what are the important areas to plow in case of a snow storm. At Kent State University, keeping the hills on Summit Street, Main Street and the PARTA bus route salted is a main concern.

The plowing in Kent is done with a three-tier process. First, all the state routes are cleared. Roberts said this isn’t due to the amount of cars, but instead to make a safe path for emergency response vehicles. Second are high-traffic areas like Summit Street and Crain Avenue. Lastly are residential areas and side streets.

“I don’t care how much it costs,” Roberts said. “We are not going to have a bus full of people slide across an intersection and get hurt on my watch.”