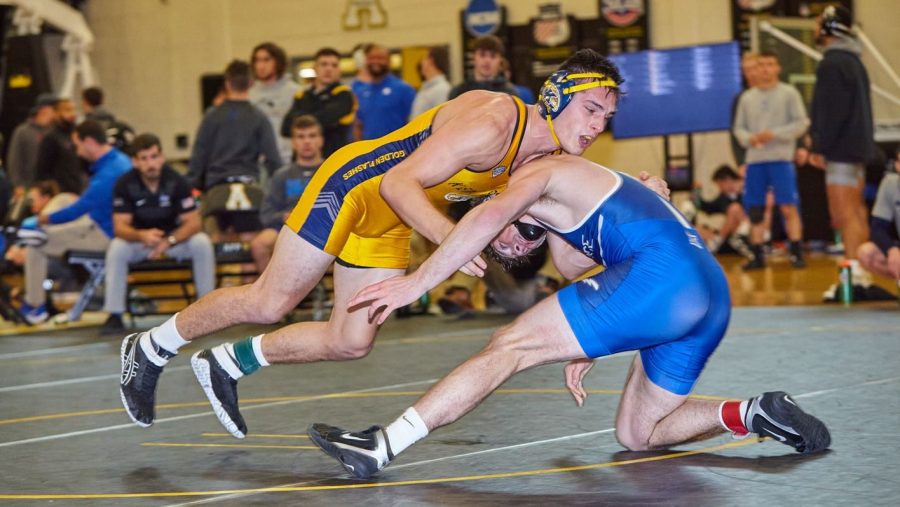 Redshirt sophomore 174-pounder Michael Ferree defeated a former national qualifier on his way to a second-place finish at the Appalachian State Invite Sunday.

Ferree defeated two Appalachian State wrestlers by decision. He beat Thomas Flitz, who is coming off of back-to-back appearances at the NCAA championships, in the second round to advance to the finals where he lost to Duke’s Matt Finesilver by a fall.

Coach Jim Andrassy said that Ferree just needed to believe in himself to get the result.

“It took a little bit for him to get some confidence,” Andrassy said. “He didn’t wrestle much last year because of COVID. As soon as he got going and got confident, he wrestled really well.”

Ferree’s finish was the highest among KSU wrestlers.

Senior 184-pounder Colin McCracken finished third. He dropped his first match in a decision before rebounding in his second match and earning a decision win.

It was McCracken’s first match since dropping down from the 197 weight pound class.

“He should have been in the finals,” Andrassy said. “He didn’t have the best first match, but he wrestled a really, really solid second match. It’s about just having a little more confidence. He didn’t have a whole lot of it in his first match. At the end of the day he lost, but he was better than that.”

Fifth-year 125-pounder Jake Ferri, who was picked first in the coaches’ preseason poll, finished fourth in his first contest of the season.

Ferri won the first round with a tech-fall before dropping his next two matches with a fall and 6-5 decision.

Early on in his fall loss, Ferri was up 8-5 against Appalachian State wrestler Caleb Smith, who is ranked 28th in the country.

But Andrassy said Ferri got into a tough situation.

Like many of his wrestlers, Andrassy said confidence would help Ferri win those matches.

“He needs to have confidence in everything he does,” Andrassy said. “So he doesn’t put himself in that position. As soon as he started scrambling, scrambling isn’t his best thing. He’s got to avoid scrambling and give up points here and there so he can give himself a chance to win the match.”

Freshman 157-pounder Enrique Munguia, who went 2-2 at the Clarion Open to start the season, finished fifth.

Munguia lost his first match of the day by a decision, before winning his next three matches all by falls, including a 15-0 tech fall.

Andrassy said Munguia followed a trend that a lot of his teammates fell trap to.

“It seemed like every one of our guys had one bad match somewhere,” Andrassy said. “It wasn’t always against the best guy, it wasn’t always against the worst guy. [Munguia’s] first match was just not very good. He went out, got a lead and then just stopped wrestling and tried to hold a lead. He found out that you can’t do that in college. You always have to be trying to get points.”

Redshirt sophomore 141-pounder Louis Newell, who placed first at the Clarion Open, finished in fourth. He started the day with a pair of victories by decision, before losing the next two by decision.

Redshirt junior heavyweight Jacob Cover earned fifth place. He dropped his first match of the day, before moving his way through the consolation bracket and winning his final bout by an 8-4 decision.

The invite was not a team-scoring event.

Kent State will next compete in the Navy Classic in Annapolis, Maryland on Saturday.

Andrassy said that early in the season, he looks for how guys will respond to the difficulties that they face.

“What happens after this?” he said. “Where does your motivation come from? Do you come in and work harder and smarter? Or are you like ‘Okay, I’m only this good. I’m not going to work any different.’ Hopefully our guys have an understanding of what they have to do to come in and get better, so next week when we’re in these same types of situations, we’ll do a little better.”