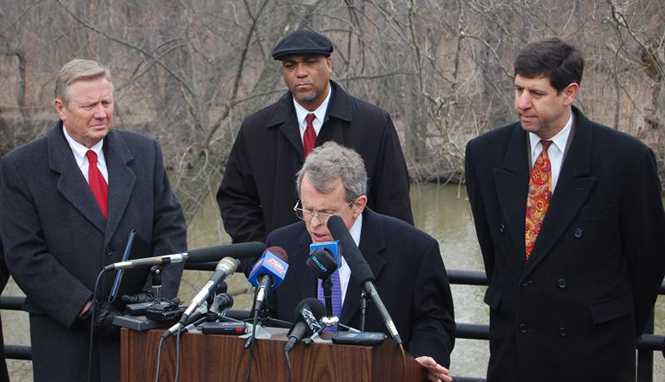 YOUNGSTOWN, Ohio — The U.S. District Attorney’s Office for Northeast Ohio announced Thursday that Ben Lupo, owner of HardRock Excavating in Youngstown, had been charged with violating the Clean Water Act.

Lupo is accused of ordering employees to dispose wastewater from the drilling process known as fracking into a storm-sewer drain near the company’s headquarters. The drain leads to the Mahoning River.

The Ohio Department of Natural Resources received an anonymous tip Jan.30 that Lupo’s company was improperly disposing the wastewater, and investigators from the ODNR and the Ohio Environmental Protection Agency said they found employees dumping the oily waste in the storm-sewer drain Jan. 31.

On Feb. 7, the investigation led to the ODNR revoking all wastewater transportation permits for HardRock Excavating. The state also revoked the injection well permits operating permits of D&L Energy — also owned by Lupo.

Jim Zehringer, director of the ODNR, said the investigation moved swiftly because of the accuracy of the anonymous tip, which outlined the time and place HardRock Excavating was expected to dump the wastewater.

Zehringer credited the ODNR’s team of investigators for working quickly and submitting evidence to the Attorney General’s Office.

Dec. 31, 2011: Lupo’s injection wells are accused of causing an earthquake in Youngstown.

Jan. 30: The ODNR gets a tip that HardRock Excavating will be dumping waste in a storm-sewer drain.

Feb. 1: The EPA releases the Initial Pollution Incident Report, which says Lupo accepted full responsibility for the dumping when speaking to an investigator.

Feb. 7: The ODNR and EPA announce that all of HardRock Excavating and D&L Energy’s injection well and waste transportation permits had been revoked.

Feb. 14: The Attorney General’s Office announces Lupo has been charged with violating the Clean Water Act.

“This charge should serve as a warning to anyone that places their personal interests ahead of the public’s safety,” Zehringer said. “ODNR will continue to aggressively pursue and seek prosecution of any business or individual that blatantly disregards the laws we have in place to protect Ohio’s communities and natural resources.”

Lupo could face a maximum of three years in prison, a $250,000 fine and one year of supervised release if convicted of violating the Clean Water Act.

Rep. Robert Hagan, of Youngstown, has been an opponent of fracking since the industry came to Northeast Ohio and Mahoning County. He blamed Lupo’s injection well company for causing a 4.0 earthquake in Youngstown Dec. 31, 2011.

In a Feb. 7 interview, the Democratic congressman said he thinks Lupo’s history of violating environmental regulations was clear, and he wanted to see him prosecuted

In an affidavit released by the district court, an EPA official testified that Lupo admitted to ordering his employees to dump the wastewater down the storm-sewer drain on Jan. 31. Lupo also told officials it was not the first time his company disposed of the water that way, either.

Lupo said his company had rinsed out wastewater tanks and disposed the waste into the drain six times over the previous six months.