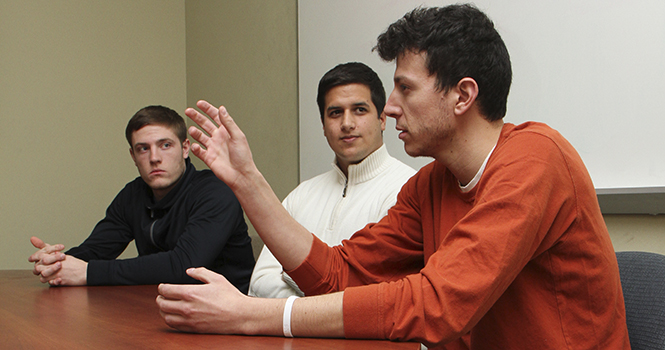 Party pictures, foul words and Facebook status hacks that damage students’ reputation among their future employers is a problem of the past as three Kent State students worked together to develop an app to scan profiles for these things.

Camden Fullmer, senior computer science major, Daniel Gur, senior computer science major, and David Steinberg, senior electronic media major, are the creators of FaceWash, a new web application. The program searches through a user’s entire Facebook profile for a preset list of words or phrases that might not be acceptable to potential employers. It checks the following for obscenities:

Steinberg said he, Fullmer and Gur had the idea for FaceWash together as they were on their way to the PennApps Hackathon competition Jan. 18 at the University of Pennsylvania. Hackathon, which hosted 120 teams, is an event where teams work to produce an application that is creative and can benefit users. Steinberg said they placed in the top 20 this year for the FaceWash app.

How to Use FaceWash (for dummies)

4. FaceWash highlights suggested unwanted words as results. Click on the highlighted words to edit or delete the posts, comments and captions.

To find specific words or phrases on a users’ Facebook account, instead of clicking, “Start,” enter the words into the custom search bar at the top of FaceWash.

Steinberg said users’ social media pages are the face the majority of the world will view them. He said the name “FaceWash” is a figurative way of cleaning up the dirt that users sometimes get on their profile pages, which would include foul language, swear words or anything that could be considered obscene.

The app went live Jan. 20, and since then, almost 120,000 Facebook users have visited the site. It currently searches for English and Spanish terms, but Gur said they are developing other languages to offer on the app. It is completely accessible through any web browser and on all mobile devices.

The three students also want to develop an image recognition feature for FaceWash. Gur said it would be something that could actually look into users’ images to spot for red solo cups and party pictures that shouldn’t be on Facebook.

Fullmer said the program works off of an application programming interface (API) that Facebook offers to pull information from any given user’s profile.

“Once we’ve been given the permission, we can grab the content and then match against it with what we’ve garnered from the internet as our list of content,” Steinberg said.

Facewash has received national attention from media sources such as The Los Angeles Times, Yahoo! Finance and was named ABC News’ App of the Week. In addition, the three were interviewed live via Skype by Fox 32 News in Chicago.

Gur said they are making a version for Twitter, which is expected to be released within the next few days. Neither Gur, Fullmer or Steinberg released the future app’s name.

The trio said they have received interest from various people wanting to partner with them, but nothing has been officially decided to announce publicly yet.

var thumbnail = ‘http://www.staterinteractive.com/photos/spring11/0131tv2.jpg’; //the URL to the thumbnail image