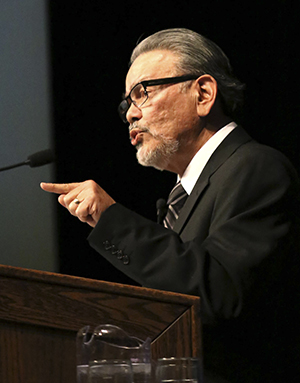 Dr. Carlos Muñoz, Jr., speaks in Kent State Ballroom on Thursday afternoon as a part of the 11th Annual MLK Jr. Celebration. Muñoz has been involved in civil and human rights activism, as well as the battle for social and economic justice, since he was a student in the 1960s. He is author of numerous publications based upon the Mexican-American, African-American and Latino political coalitions. Photo by Jenna Watson.

Muñoz has been lecturing and speaking for more than 40 years, but this is his first visit to Kent State University. While Muñoz covered several topics, his overarching message was to recognize King’s accomplishments more than just once a year.

“The words he wrote and spoke remain meaningful today,” he said. “Yes, it is good to celebrate his birthday every year, but let’s go beyond celebrating his birthday and show our commitment by putting his words into practice.”

This year Dana Lawless-Andric, executive director of diversity and inclusion, and Shana Lee, director of the Student Multicultural Center, co-chaired the Martin Luther King Jr. Celebration Committee, which scheduled all of the events.

Lee said the committee purposely decided to keep the same theme as last year: empowering the individual, strengthening the community.

“Every year we look to try and find a different theme, but this year we just figured we want to keep it the same because it’s so broad that it can encompass numerous topics,” Lee said.

Muñoz was the founder of the Chicano Civil Rights Movement and is currently active in the Immigrant Rights Movement. Lawless-Andric thought his background made him fitting for the intentions of the event.

“When you look at the theme, empowering the individual, strengthening the community, and you look at Dr. Muñoz in particular, his history is very much connected to Dr. King,” said Lawless-Andric. “’That’s why we thought he would be a good fit to talk about Dr. King and what that means today.”

Muñoz, during his speech, brought to light many controversial topics, such as the United States’ foreign policy and Barack Obama’s accomplishments as a president.

“From what I understood and what I received out of it was a message of kind of a single person’s personal point of view and it really represented a struggle and experience of his life,” Lowell said. “He didn’t really take into account other people’s lives. He mentioned it, but he really didn’t view their perspective as much as I believe he should have, especially when he’s talking about multiple perspectives.”

Despite the controversial aspects of his speech, Muñoz’s words did resonate with Samantha Evans, sophomore zoology major.

“I think his speech will affect my behavior in some ways,” Evans said. “I’m normally shy and reserved, and Mr. Muñoz challenged the audience to incorporate Martin Luther King Jr.’s words in our daily lives.”

Lawless-Andric viewed Muñoz’s statements as a positive aspect to get students thinking.

“He had some remarks that I think were controversial and remarks that don’t reflect maybe the opinion of people, but I think that’s kind of the point he was making is to have an opinion and fight for it,” she said. “I think the permeating theme was justice.”

In closing, Muñoz encouraged the audience to take action and work together to keep Dr. King’s legacy thriving now and for years to come.

“We must become active citizens in our communities, workplace and elsewhere,” he said. “We must at all costs keep Dr. King’s revolutionary spirit alive.”