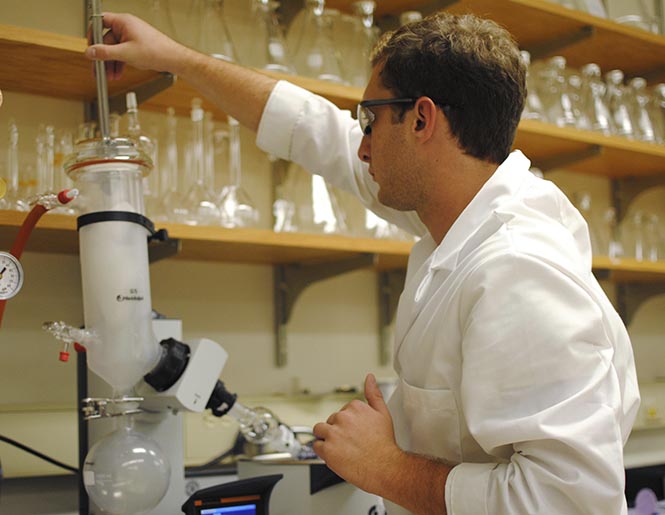 Junior biotechnology major Alek Nielsen adds more dry ice to a "roto vap" during research in the biomaterials lab in the liquid crystal building on Friday, September 14. The "roto vap" evaporates solvants to get a more concentrated product. The project involves stem cell research and could last for 5-6 years. Photo by JENNA WATSON.

The College of Applied Engineering, Sustainability and Technology plans to offer a major concentration and minor in liquid crystal and display engineering.

If the concentration and minor are approved by the Educational Policy Committee of Kent State on January 28, they will be offered in Fall 2013, said Simon Song, Dean of the College of Applied Engineering, Sustainability and Technology.

“There’s a significant need in local and global industry in liquid crystal and display engineering,” Song said. “We have four companies right in Kent and two of them actually approached us to set up a program like this. The Liquid Crystal Institute felt the same needs for the industry.”

The Kent State Liquid Crystal Institute was the world’s first research center focused on liquid crystal research when it was founded in 1965, according to the Kent State Liquid Crystal Institute website. They created the first liquid crystal display. Likewise, this concentration and minor will be the first program of its type in the country, Song said.

The program would include a concentration of the applied engineering major and a minor requiring 8 courses that amount to 24 credit hours, Song said.

The display industry has about $150 million in annual sales. Most of the largest display manufacturers are in East Asian countries such as China, Korea and Japan, Song said.

Samsung, the world’s largest display manufacturer, has sent a letter of support and will have co-oping opportunities for the students, Song said.

“Our students can work in the world’s largest display manufacturer and get trained and, of course, the job market is good,” Song said. “We have Apple and HP [in the United States] and they also need people with this kind of background.”

As the program grows, the college would apply to make the concentration a major, which requires approval from the Ohio Board of Regents, Song said.

“This is a unique combination, Song said. “Students will learn the most exciting and cutting edge technology. This industry looks very bright in the next 30, 50 years down the road.”