How one student remained optimistic throughout her battle with cancer 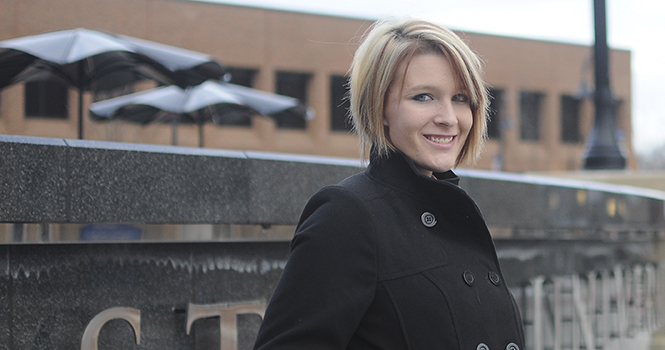 Megan Gibbons, a sophomore pre-nursing major, in front of the Kent University Library on Jan. 8. Gibbons is currently undergoing chemotherapy for melanoma, and has transferred to the Stark satelite campus. Photo by Jacob Byk

“It’s like someone’s smacking my head onto concrete,” sophomore pre-nursing major Megan Gibbons said, as she remembered the worst side effects of chemotherapy last year. “I’ve never had headaches like this before.”

During the summer of 2011, a month before her freshman year at Kent State, Gibbons was diagnosed with stage 3A melanoma, a type of cancer that usually forms in pigment cells of the skin. Stage 3A is one of the most severe forms, affecting lymph nodes and possibly surrounding areas.

“At first it didn’t really hit me that I had melanoma,” she said. “In a blink of an eye my life changed.”

Gibbons said she never spent much time outside without wearing sunscreen. She preferred indoor activities like dancing much more. Cancer doesn’t run in her family either. As far back as her family could tell, she was the first to be diagnosed with cancer.

“The only answer the doctors could give me was DNA,” she said. “It’s in my genes.”

Gibbons was immediately scheduled for surgery to remove the cancerous mole, and though the mole was removed, her relief was short-lived. Her plastic surgeon handed her a grave prognosis. The cancer had spread.

“He told me I only had five years to live…I was like, ‘Oh my gosh I’ll be 22 then. That’s right at the start of my life. What am I gonna do?’” Gibbons asked herself.

The plastic surgeon who performed three of her surgeries, the second to remove lymph nodes and the third to remove a worrisome gland, told Gibbons there was nothing he could do to help her other than buy her a bit of time.

“We didn’t tell anyone. My sisters didn’t even know. It was just me and my parents and we just clung onto each other,” Gibbons said.

After Megan’s third surgery, she and her family decided to seek a second opinion at the Cleveland Clinic, where the medical personnel assured her that there was, in fact, no expiration date on her life. She was immediately scheduled to undergo interferon treatments, a form of chemotherapy that works to build the defenses of the immune system and prevents and destroys tumors.

Megan received interferon treatments every day for four weeks during the semester. In the morning, her parents drove her to Kent State for classes. Then they drove her to Cleveland for 30 uncomfortable minutes of treatment, then back to her hometown of Diamond. Once her four weeks were up, Gibbons continued to give herself interferon injections three days a week, which is when the side effects began to take a toll. She was plagued with sickness and headaches that, at times, left her physically disabled.

“There was one day a few weeks ago that was probably the worst. I just cried and cried,” she said.

During the last 11 months, Gibbons has maintained her status as a full-time student while working 15 hours per week at the Kent State Library. She said the library was accommodating and helpful during this time, giving her a modified workload that prevented her from standing for too long.

“Instead of being in the stacks, I work in the basement and clean periodicals all day,” she said.

Despite the hurdles, Gibbons said she’s 100 percent optimistic about her future and gives all the credit to family and the life-long friends who have supported her.

“My dad always tells me corny jokes.” Gibbons said. “My friends have been so supportive of me; they understand if I just need to sit down and take a break.”

Gibbons said she confides in writing when things get unbearable. In March, she made a YouTube Video called “Who I am” in which she details her struggles in a series of notecards, while Coldplay’s “Fix You” plays in the background.

“There was just one day I was just super emotional about everything,” she said. “I keep stuff bottled in so I just got to my breaking point and wrote it all out. I’m not used to sitting down and telling people how I feel and what I’m thinking and I found it actually helps a lot.”

The disclaimer on the video reads, “This is my life story. I am not trying to get your sympathy. This is just my way of expressing myself.”

“Without my friends and family I wouldn’t be able to get through this,” the notecards read. “I love them so much. So my advice to you: Are you listening? Love your friends and family and yourself; cherish your time with them because in a blink of an eye life can get in the way.”

Mariah said her sister’s story has inspired her to face life’s challenges head on without the slightest ounce of self-pity.

“She has taught me that when I think I’m having a bad day, it’s nothing compared to what she’s had to go through,” she said.

Megan has every reason to be optimistic about her future, Mariah said. Her most recent scans came back clean, which means she stops interferon treatment in the coming weeks.

“I found out before Christmas and just thought, ‘This is the greatest Christmas gift I could ask for,’” Mariah said.

She is beyond excited about her sister’s effective treatment and the family plans on throwing a party to celebrate.

Now that the worst is over, Gibbons plans to put her experiences to good use. She’s transferring to Kent State’s Stark campus this semester to study to be a pediatric oncology nurse.

“I would bring compassion to the job because I’ve been there,” she said.

Gibbons said she wouldn’t rescind her diagnosis because it has made her the person she is today; a someone she’s proud of.

“I don’t take life for granted anymore,” Megan said. “I appreciate all the little things. I’ve found strength I never knew I had.”

If she could go back in time to her worst day and tell herself one thing, she said it would be something of courage.

“I have a countdown at home to say how many more days of shots I have left and I would say, ‘You’ve already made it this far. You only have this much left. Just keep going. Now is not the time to give up.’”