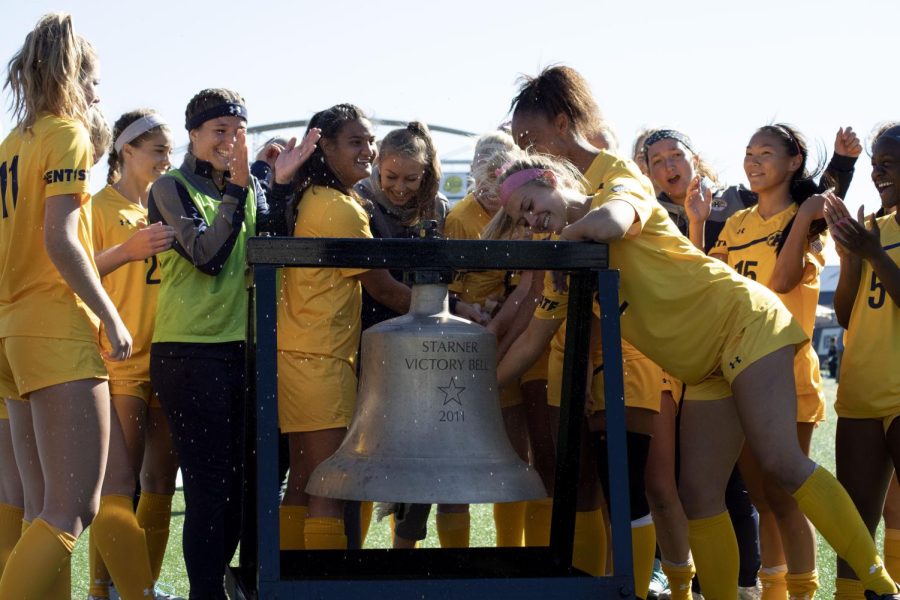 Then Kent State women’s soccer team celebrate their 2-0 win over University of Akron by ringing the Starner Victory Bell on Oct. 13, 2019.

The Kent State women’s soccer team has practiced with as little as six players recently due to players being in quarantine.

The volleyball team has had to cancel several practices so far this offseason.

All three teams would normally be in the middle of their fall seasons, but the COVID-19 pandemic caused the Mid-American Conference to move their seasons to spring.

“Under the circumstances, we are making the most of our training,” soccer coach Rob Marinaro said. “We are ready for the spring season. To play is a big win.”

“We are in a really good place despite having multiple players out right now,” women’s volleyball coach Don Gromala said. “This has been a great opportunity to try new lineups before the season.”

“Because of medical privacy laws, we do not comment on the health of any individuals,” Vincent said.

The interviews with Marinaro and Gromala were completed first, and both offered information about how their teams are dealing with COVID-19 issues. By the time DeSandes-Moyer was interviewed, the university had instructed its coaches to not talk about COVID-19 cases or exposures on their teams.

The women’s soccer team has had to cancel and alter multiple practices this fall because of players being quarantined thanks to possible exposure to the coronavirus.

Marinaro said practices have been very challenging with so many players missing, but upperclassmen “have been doing a great job” of leading them. He said he tried to make the preseason as normal as possible, but that has been difficult with so few players at practice.

“Our athletes have done a fantastic job of adapting to the unknowns,” Marinaro said. “Our primary goal is to use training to ease the off-the-field stress of our players.”

Kats led the MAC in shots taken with 91 and earned an all-conference first team spot for the second year in a row. She led the Flashes in goals and assists with eight each.

Shedenhelm was named to the second team all-conference and finished second in the MAC in shots taken. She had six goals and six assists last year.

Hellstrom started 18 of Kent State’s matches and finished third on the team in points. She had five goals and three assists.

The team came one win short of making the MAC tournament, marking the first time since 2010 that the team has missed the postseason.

The Flashes’ season will begin on March 4; they will play 10 conference matches.

Gromala said one freshman opted out of playing this season because of concerns about coronavirus. He said that as of two weeks ago, the team had been able to get in only three full practices because of players quarantining.

Despite not getting on the court much together, Gromala said that this is one of the closest teams off the court he has had over the years. He said he was proud of how resilient his team has been so far dealing with school and issues off the court.

“Our staff was pleasantly surprised with the high level the team returned to campus at after such a long break without being able to train with our staff,” he said.

The team was 14-15 last season and 7-9 in the MAC. It lost to Ohio University in the first round of the conference tournament.

Key players returning for the Flashes are Alex Haffner, who earned all-MAC honorable mention last year; Morgan Copley and Savannah Matthews, members of the 2019 MAC all-freshman team; and Erin Gardner, who ranked 26th in digs in Division I and was an all-MAC freshman two years ago.

“Copley, Haffner and Gardner have all competed at a high level,” Gromala said. “Jacqlyn Caspers has stepped up in our middles group.”

Caspers played in 12 matches and started in eight last season.

The Flashes will play 22 games, two against every MAC school, starting on Jan. 22.

The field hockey team is coming off a run to the MAC championship game, where it lost to Miami University. The Flashes won the MAC regular season title with a 5-1 conference record and finished 11-9 overall. DeSandes-Moyer was named MAC coach of the year in her first season at Kent State.

DeSandes-Moyer said the biggest challenge her team faces this year is replacing the two all-MAC seniors who graduated.

DeSandes-Moyer described junior forward Knapp, a second team all-MAC selection, as a “player who leads with her play.” Knapp finished second on the team and sixth in the MAC with seven goals.

Junior midfielder Cambra Soler started in all 18 games for the Flashes last season. She had one goal and an assist.

DeSandes-Moyer said she was ecstatic to see how well her first recruiting class has done in practice so far.

The team is scheduled to play 14 games, starting March 12.

“14 games is a very robust schedule,” DeSandes-Moyer said. “We are just grateful to get the opportunity to compete for the MAC Championship.”

Sean is a sports reporter. Contact him at [email protected]