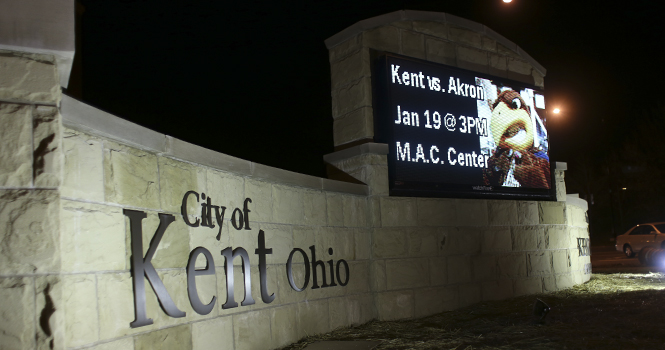 A new electronic sign sits at the intersection of State Route 59 and South Water Street on Jan. 17. The new sign, which cost $92,000 is shared between the City of Kent and Kent State University. Photo by Brian Smith.

The sign, located on the corner of Haymaker Parkway and South Water Street, was lit up Jan. 8 and originally announced the start of the semester, congratulated the Kent State football team on an historic season and informed city residents of a city council meeting.

Both the university and the city of Kent had been planning on installing digital signs for some time, so it made sense for them to team together for the project, said Tom Euclide, associate vice president of Facilities Planning and Operations.

Kent State split the original $92,000 price tag of the sign with the city and will share management responsibilities, as well as the small monthly electricity cost to keep the sign lit. The exact cost of the electricity bill is not yet known.

“An informational sign like this is a very economical method to let the community, which includes students, staff, faculty and the general public, know all the great things that are going on in the area,” Euclide said. “In working with the city, we have substantially reduced the installation as well as the operational costs when compared to our original path of each installing and maintaining our own separate sign.”

Students will benefit from the sign because it will allow the university to inform them of large campus events, such as theater shows, speakers and important deadlines, Euclide said.

Many students commented that they drove past the sign on their way back to campus or while they were downtown during the weekend, but also said that they didn’t pay attention or couldn’t stop long enough to see what the sign said.

“I paid my money here for classes, not to build a sign,” she said.

Others could see how splitting the cost with the city was logical for the university.

“On the one hand, Kent State is a big part of the community, so it makes sense if it’s a betterment to the community,” said Nikhil Sharma, junior computer science major.

“I can see how it would benefit students on that corner, it’s a big draw there, I mean I like walking downtown,” said Kemph, “but I don’t see why we needed to pay that much for it.”