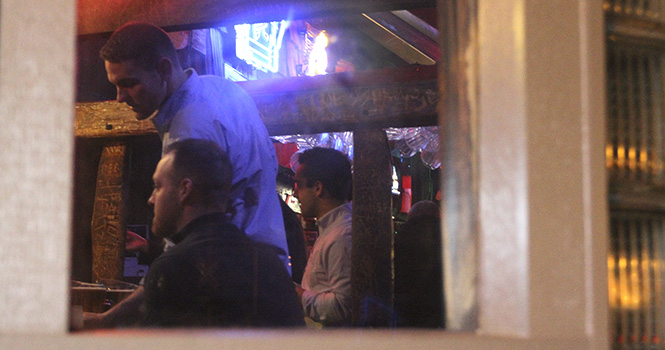 The Loft in downtown Kent is packed with customers on Thursday, Jan. 24 since "Thirsty Thursdays" are a very popular night at the bars. Photo by Chelsae Ketchum.

Thursdays often fit into a student’s schedule better than any other day of the week due to the full course loads, jobs, clubs and family commitments college students juggle each semester.

Cody Jones, senior biology major, finds Thursdays, rather than Fridays, to be the most convenient nights to go out because of his busy schedule.

“I go out when I can because I have to be at Robinson Memorial Hospital at 6 a.m. to work on Saturdays,” Jones said.

Other students, like Rachel Fryer, sophomore fashion merchandising major, often return to their hometowns Friday through Sunday, so they go out on Thursday nights to spend time with friends they have in Kent.

“I go home a lot on the weekends,” Fryer said. “My friends and I go out to Ray’s or the Zephyr or Water Street Tavern a lot on Thursdays.”

Chris Cowles, Ray’s Place manager, said he sees more Kent State students at the bar on Thursday nights because many tend to leave the area the rest of the weekend.

“Thursday is a big night for students to go out and a big night before students leave town,” Cowles said. “Kent is a ‘suitcase town.’ A lot of times, students go back home on Fridays.”

Ray’s Place’s revenue is close to the same amount on Thursdays compared to Fridays, but the bar does offer dollar-off draft beers from 4 to 9 p.m. Thursday nights to draw in more customers. Cowles said a student crowd fills the bar Thursday nights, while more Kent locals come in on Fridays.

“It’s usually a fun crowd that comes in here,” Cowles said. “If they have class Friday, it must be late because students stay here a long time.”

“We’re very busy on Thursdays,” Fuller said. “I think the big reason is students have their new class schedules and don’t have class Friday. If they do have class, they must not have a heavy load.”

Fuller said Water Street Tavern’s revenue is about the same Thursday through Saturday. The bar offers cheap drink specials and plays Top 40 music on Thursdays nights, while the bands that perform on Friday nights are usually tailored more toward the local crowd.

“Everything is always cheap here,” Fuller said. “We love it when students come out, and we get busy.”

Josh Sed, bartender at Zephyr Pub, said the Zephyr’s large college crowd on Thursdays is one of the busiest days of the weekend. Saturdays create the most revenue.

“Thursday is pretty much a college crowd,” Sed, said. “Friday is more diverse. People come in early for Happy Hour, and college kids come in later.”

Meesha Kress, Kent State alumna, said she liked to go out multiple days during the week, but socializing and entertainment drew her downtown on Thursdays.

“I went out on Thursdays because it’s the biggest night out in Kent with the most people,” Kress, said. “Plus, there’s karaoke at Brewhouse only on Thursdays, which I like to participate in.”

Like many students, Libby Colley, sophomore communication studies major, said she goes out on Thursday nights but stays in on Fridays to rest or study.

“There just isn’t anything going on Fridays,” Colley said. “I sleep all day Friday and go to my class later in the day.”

Going out on “Thirsty Thursday” and staying in on Friday is not just a trend among Kent State students. Students at other universities, such as the University of Akron, also find the day to be one of the most popular to go out and visit the bars.

“A lot of business classes are only Monday through Thursday, so to [students], the end of the week is Thursdays,” Tim Bresson, senior computer engineering major at the University of Akron, said. “Otherwise, it’s probably the fact that no one considers Friday to be a productive day anyway. It’s like a celebration of not caring and preparing for the weekend.”

Bresson said Akron’s Thursdays Lounge is an especially popular bar that students from the University of Akron, as well as Kent State, visit on Thursday nights. He said going out and drinking on Thursday nights gives students a head-start on the weekend.

“It gives you a day break between your drinking because if you didn’t drink Thursday, you would drink Friday and not want to drink Saturday,” Bresson said.

“Speaking from experience on the night shift, the cause of most arrests probably comes from a lot of underage drinking,” Prusha said. “People start acting disorderly and start fights. This draws our attention, and then we find out they’re 19 years old and drunk. Public intoxication causes a lot of arrests as well.”

The Kent Police Department requires at least seven units to patrol the uptown area from 11 p.m. until 3 a.m. Thursday through Saturday.