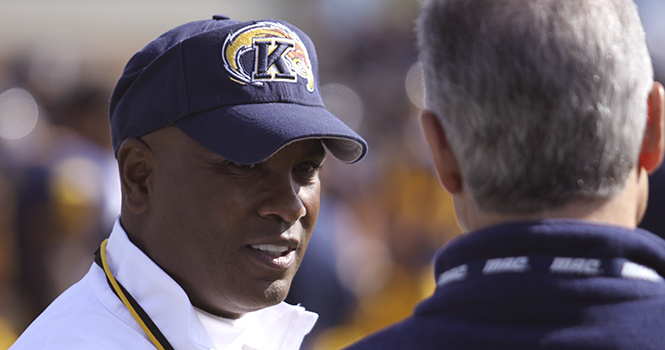 The confirmation from Nielsen came a day after Hazell accepted an offer to become the new head coach of the Purdue University Boilermakers. Hazell said in a press conference Wednesday morning that Purdue had granted him permission to coach the Flashes in the bowl game.

Nielsen said he spoke with the players and coaches after Hazell’s morning meeting with them and informed them of the decision in the afternoon.

“There’s great respect for [Hazell],” Nielsen said. “It wasn’t a difficult decision to make, and Darrell’s excited about it.”

Nielsen said before Hazell accepted the job offer from Purdue, he and Hazell had dinner and discussed the offer among other things, including the possibility of Hazell remaining with the Flashes. Nielsen would not go into specifics, but he said he had a feeling Hazell would draw attention and offers from other schools after this season.

Awards and accomplishments at Kent State:

“When you have very successful coaches, they do often times get other opportunities,” Nielsen said. “I think when I hired Darrell, I thought that if he could do what we thought we could do here that he’d be a very hot commodity. Obviously, he was after two years.”

Hazell will be standing on a different team’s sideline come next season, but Nielsen said not much has changed about Hazell over the course of the last two seasons.

“He’s exactly the same guy we hired two years ago,” Nielsen said. “He never changed whether we were 1-6 or 11-1, and he hasn’t changed in the last day. He’s the same Darrell Hazell that we hired. I wish him the best.”

Search for a new coach

Nielsen said he is not going to put a timetable on when the next Kent State football coach will be selected, although he added the position has already drawn a lot of interest. There is also a possibility that one of the coaches currently on the staff could apply to fill the head coaching spot.

“We have a great staff and some coaches who have head coaching experience,” Nielsen said. “I’m fully aware of those guys. They’ve all been with us for two years, so I know them quite well. I would hope that some of them do apply.”

According to senior offensive lineman Brian Winters, offensive coordinator Brian Rock and defensive coordinator Jon Heacock ran practice Tuesday in the absence of Hazell. Heacock held the head coaching position at Youngstown State prior to being hired by Hazell before the 2011 season.

Nielsen, who hired Hazell in December 2010, said he doesn’t really feel pressured by the idea of “finding the next Darrell Hazell.”

“I don’t think we’ll ever find another Darrell Hazell,” Nielsen said. “But I’m very confident that we’ll find somebody with the same kind of qualities and integrity and the willingness to work with us knowing that we’re not a finished product. We’re far from a finished product based on our tradition and history here”

Searching for a coach, Nielsen said, is much different now than two years ago, when there was uncertainty about how the Flashes would perform as a team after several losing seasons in the last decade. But with Kent State coming off its best season in program history, Nielsen is confident that what the Flashes accomplished this season will strengthen the search.

“There was a question whether we could get it done here,” Nielsen said. “Darrell’s now proved we can get it done. So I’ve got at least that behind the resume of all the other great things we have going at the university and in Kent.”

It had been a wild 24-hours for players on the Kent State football team as the information about Hazell accepting Purdue’s offer became evident.

Wednesday featured the first practice for the Flashes without their two-year head coach in charge, and Winters described the players’ attitudes as down but understanding.

“We all knew from the get-go that if he had a good season, stuff like this could happen,” Winters said. “We, as a team, are not trying to grieve on it too much because we still have one more game left. We just want to keep going forward. We’re going to really miss coach Hazell, he’s a great coach and we all know that, but we can’t dwell on that.”

Winters said the first practice without Hazell, while it was short, didn’t feel the same as it had all through the season. He said the team will find a way around that and do what it needs to do to prepare.

Junior defensive tackle Roosevelt Nix said he believed most of the players understand the move Hazell made and added that there are no hard feelings from him.

“I think since day one we’ve established a relationship with coaches,” Nix said. “You’ve got to do what you’ve got to do sometimes. It’s a great opportunity for coach Hazell.”

Nix, whom Hazell named the defensive captain before the season began, said it was a bit of a challenge filtering through the pool of rumors and information that spread online in the hours leading up to Hazell’s official decision.

“Anytime you have something of that nature happening there are going to be rumors,” Nix said. “You have to tend to them quickly before they get out of hand.”

Several players tweeted about the Hazell rumors throughout Tuesday afternoon and evening, with some denying the reports and some expressing their feelings on the potential. By the end of the night, media outlets such as ESPN and the Big Ten Network were reporting that Hazell had officially accepted the job to coach at Purdue.

Senior linebacker Luke Batton said it wasn’t a complete surprise that Hazell took the job with Purdue as quickly as he did.

“Anybody would have taken that kind of offer,” Batton said. “It was an opportunity he had for his career, and most of the guys knew it was coming. So I guess everyone will be ok with it.”

A few of the players, including Nix, commended Hazell for the way he approached the situation and addressed the team about what was about to happen.

“I don’t think he handled it wrong in any sort of way,” Nix said. “Some coaches just up and leave, and the players never hear from them again. Everyone believes in coach Hazell and what he’s done here.”