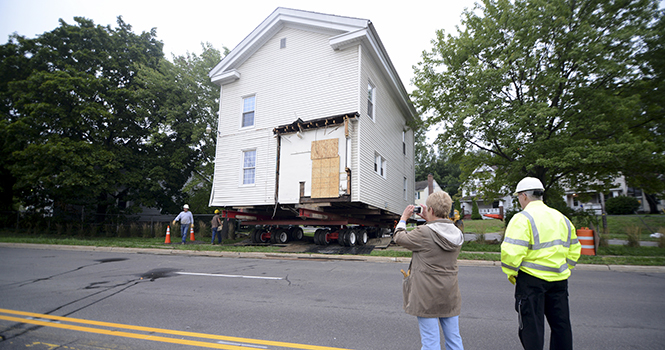 Although the deadline for relocation of the Kent Wells Sherman House has passed, the historic home will not face destruction pending legal disputes about its placement.

A group in support of saving the green space at 247 N. Water St., better known as the “Standing Rock Garden,” is pursuing legal action to stop the house’s relocation to the space.

The green space is currently used by SRCA as an organic garden, outdoor art display and practice space for a children’s theatre group.

The Friends of the Kent Wells Sherman House, the group fighting to preserve the house, was initially given a deadline of Dec. 1 to relocate the house from its current location at the western end of East College Avenue. The house originally sat at 250 Erie St. but had to be moved to make way for the University Esplanade Expansion. The university has offered $40,000 toward the relocation.

“It is our hope that we can move forward with the transaction and relocation of the house,” said Emily Vincent, director of university media relations. “Details still need to be worked out.”

“There’s a number of reasons to appeal the Planning Commission’s decision, from the strained interpretations of city code that were being offered to the [Planning Commission] at the meeting to the questionable standing on which the second application was made to begin with,” Regula Meyer said.

Although a Portage County magistrate denied request for a preliminary injunction to stop placement of the house on the lot, Regula Meyer said there are still several other legal issues to be addressed.

“There’s still the decision on the Planning Commission and whether or not that appeal will be overturned or not. That needs to be decided,” Regula Meyer said. “And there’s still the issue of Sunshine Laws for the Architectural Review Board that needs decided.”

If the Architectural Review Board and Planning Commission’s rulings are found to have violated Ohio law, the house may face destruction. If the university is willing to extend its deadline, however, those fighting to save the house may have to search for a new site location and begin the process of having it approved over again.

“It’s not going to be destroyed tomorrow,” Regula Meyer said. “We’re still at the same place we were a week ago.”