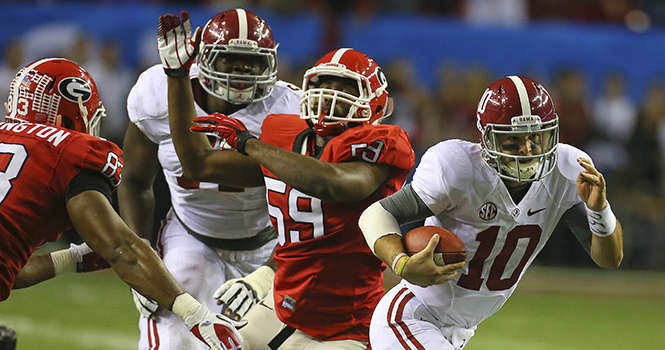 Alabama quarterback AJ McCarron (10) breaks away from Georgia linebacker Jordan Jenkins on a quarterback keeper in the SEC championship game at the Georgia Dome in Atlanta, Georgia, on Saturday, December 1, 2012. Alabama won, 32-28. Photo by CURTIS COMPTON.

Coming off of a victory against Georgia in the SEC championship game, Alabama will bring their powerful offense to south Florida to face a Notre Dame defense that is averaging 10.3 points allowed per game.

Alabama quarterback AJ McCarron will lead the Crimson Tide, as he has thrown for 2,669 passing yards and 26 touchdowns with three interceptions. Complementing McCarron will be running backs Eddie Lacy and T.J. Yeldon, who are both 1,000-yard running backs and have combined to score 27 touchdowns this season.

Quarterback Everett Golson, who has thrown for 2,135 passing yards and 11 touchdowns with five touchdowns, will lead the Notre Dame offense. Running back Theo Riddick will help Golson lead the Irish offense, as he rushed for 880 yards and five touchdowns. Linebacker and Heisman Trophy finalist Manti Te’o has led the team’s defense all season. Te’o has 103 tackles on the season, which is good for his third straight year of at least 100 tackles.

With Alabama being the favorite, Notre Dame will have to play their best game of the season if they hope to bring the crystal football back to South Bend.

My Prediction: Alabama brings the title back to Tuscaloosa with a 28-14 win.

The Northern Illinois Huskies, Mid-American Conference champion, are crashing the BCS party, and have earned a matchup with the mighty Florida State Seminoles in the Orange Bowl. Say what you will about how Northern Illinois doesn’t belong, but they did what they had to do to earn their spot in a BCS game that will not only bring good exposure to their school, but to the whole conference as well.

Florida State, who is a heavy favorite in this matchup, is coming off of a 21-15 victory over Georgia Tech in the ACC Championship game. The Seminoles will be led by quarterback EJ Manuel, who has thrown for 3,101 passing yards and 22 touchdowns this season while throwing 10 interceptions.

Northern Illinois will have to rely heavily on the arm, and legs, of quarterback Jordan Lynch, as he has counted for a jaw-dropping 4,733 total yards and 43 touchdowns. Lynch leads a high-powered Huskie offense that is averaging 40.8 points a game.

In the biggest game in school history, the Huskies will have to show the college football world that the MAC can compete with any conference in the country.

Oregon vs. Kansas State. People expected these two teams to be playing each other, but not in the Fiesta Bowl. After Oregon and Kansas State were upset by Stanford and Baylor, respectively, the Ducks and the Wildcats were all but knocked out of the national championship race.

This is going to be a matchup of two high-powered offenses that are the calling card of their teams. Oregon’s passing attack will be led by quarterback Marcus Mariota, who has thrown for 2,511 passing yards and 30 touchdowns with six interceptions, while their rushing attack will be led by speedy running back Kenjon Barner, who has rushed for 1,624 yards and 21 touchdowns this season.

A matchup to watch in this game will be the Oregon ground game vs. the Kansas State ground game. Each team’s defense will have to be at the top of their game when these two teams meet in Phoenix.

My Prediction: Oregon wins their second BCS game in the last four years 35-31.