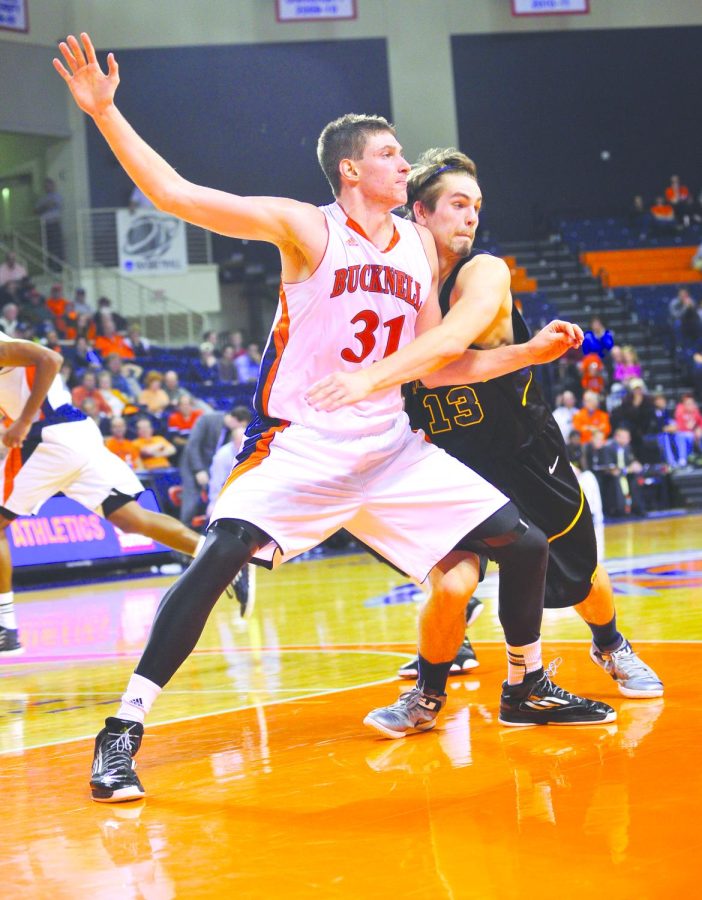 Trailing by eight early in the first half, Kent State found itself in a familiar situation.

The Flashes had been here before, just three days earlier against Princeton.

Kent State (5-4) overcame the first-half deficit this time, thanks to some timely contributions from some lesser-known reserves. But the Flashes dug themselves another hole early in the second half and again couldn’t climb out, falling to Bucknell (8-1) 76-60 Tuesday in front of 2,646 at the Sojka Pavilion in Lewisburg, Pa.

Things were looking up early for the Flashes, who quickly reversed any feelings of “here we go again” in the first half.

Trailing 13-5 just 7:19 into the game, sophomore guard Devareaux Manley made back-to-back 3-pointers to cut the Bucknell lead to two. Sophomore guard Kris Brewer’s layup tied the game at 13-13, and he later gave Kent State its first lead of the game, 28-26, with 3:20 remaining in the half.

“We played pretty well for 20 minutes,” Senderoff said. “We were in the game at halftime, down one.”

Bucknell opened the second half on an 11-4 run to take an eight-point lead and regain any momentum it had surrendered in the first half.

“From our perspective, we just didn’t do the things we need to do to win games,” Senderoff said. “[We] have to defend better, have to rebound better. We have to continue to share the ball [and] shoot the ball well, which we have struggled with the last couple games.”

Kent State allowed Bison senior center Mike Muscala to rack up 17 points in the second half on 7 of 9 shooting. Muscala finished with a game-high 27 points and six rebounds.

“I think [Muscala is] the best post player that we’ve played since we played [former Central Michigan and current Dallas Mavericks center] Chris Kaman back in [2003],” Senderoff said. “He’s just good. He lets the game come to him and he’s aggressive and plays hard and is skilled … he’s fantastic.”

Meanwhile, with seniors Chris Evans and Randal Holt struggling, the Flashes couldn’t get anything going offensively.

Holt scored only six points, but tried to help the offense in other ways, finishing with six assists.

“[Holt] didn’t get a lot of shots off, but he passed the ball very well,” Senderoff said. “[He] did a good job of moving the basketball and not trying to take shots that weren’t there.”

Evans, on the other hand, had a night he’ll likely want to forget. The senior forward was named Mid-American Conference East Division Player of the Week on Tuesday morning, but made just 2 of 12 shots and finished with five points.

“… Evans struggled — he struggled in every aspect,” Senderoff said. “I think he got frustrated. They did a good job of doubling him, he got the ball taken from him one time, he forced some shots — he just struggled.”

Senderoff attributed some of Evans’ recent struggles to his still-new role in the Flashes offense.

“This is new for him,” Senderoff said. “Last year, he averaged 20 minutes a game and came off the bench. He’s a junior college player so he hasn’t been with us for four years. Now he’s the focal point of everybody’s defense, and he should be.”

Evans and Holt combined to make just 3 of 16 shots in the loss.

“I don’t care about the point total, but when those two guys shoot 3 for 16…we’re just going to have a tough time winning when that’s the case,” Senderoff said.

Without the usual contributions from Evans and Holt in the scoring category, Manley had a difficult time finding open shots in the second half as well.

“Whenever I check in, I just try to do the same thing, knock down shots,” Manley said. “They were finding me in the first half. But in the second half — I’m not going to say they weren’t finding me — but we really couldn’t execute the way we wanted to execute, so the looks weren’t there like they were in the first half.”

Senderoff mentioned the fact that multiple players filled the void created by Evans’ and Holt’s poor shooting performance, which wasn’t the case against Princeton.

Kris Brewer scored 10 points as part of a bench that finished with 29 of the Flashes’ 60 points. Brewer and Manley were the only two players to finish in double figures for Kent State.

Kent State will travel to Cincinnati to face Xavier on Sunday. Tip-off is at 4 p.m.