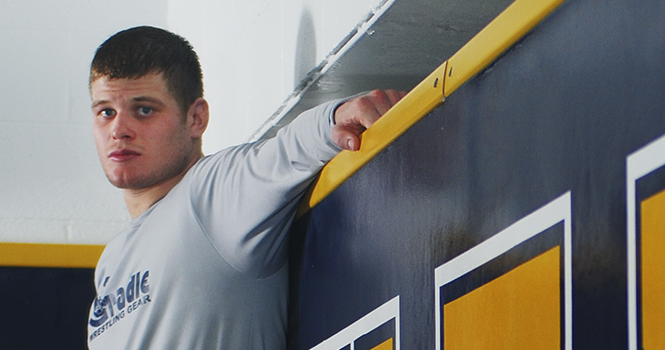 Kent State senior Dustin Kilgore was named MAC Wrestler of the Week on Dec. 5. Kilgore holds the record for most victories in Kent State’s wrestling program. Photo by Sam Verbulecz.

Kent State senior Dustin Kilgore was named the Mid-American Conference Wrestler of the Week Wednesday after winning the Cliff Keen Las Vegas Invitational this past weekend.

In the two-day tournament, Kilgore went 5-0 with a pin and two major decisions. He defeated No. 12 Andrew Campolattano from Ohio State 6-3 in his semi-final bout, then went on to top No. 3 Alfonso Hernandez of Wyoming in the finals 5-4.

“He’s done a good job so far,” head coach Jim Andrassy said. “He hasn’t peaked yet, which is important. We think his best this season is still yet to come.”

Kilgore’s win against Hernandez marks his 150th career victory. He is Kent State’s all-time record-holder for most career wins and has not lost a collegiate match since December 2010.

“I don’t think there’s a guy in the country he should lose to right now,” Andrassy said. “As good as he is and as talented as he is, I know that’s a lot of pressure to put on him, but there’s really no one in the country that is as suitably strong as him, conditioned-wise as good as him. I think with everything he offers and has, I expect him to go undefeated this year, and he expects to go undefeated.”

Currently ranked No. 1 in the 197-pound division by all the national polls, Kilgore is 15-0 so far this season and has won all four tournaments in which he’s competed. He also leads the Golden Flashes with six pins and four major decisions.

The Kent State Golden Flashes return to action on Dec. 14, as they travel to Columbus to take on the Ohio State Buckeyes in their first dual meet of the season.