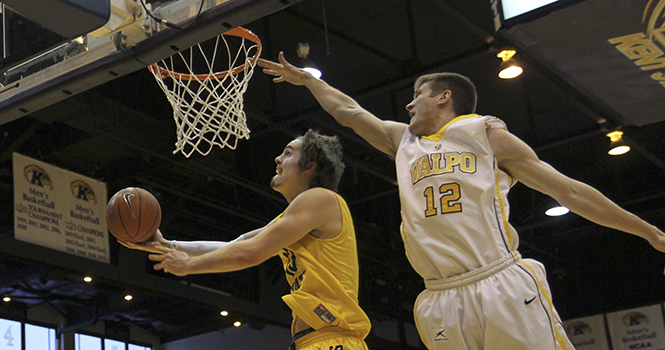 Junior forward Mark Henniger attempts a lay-up during an 88-83 overtime loss to Valparaiso Sunday, Nov. 18 at the M.A.C. Center. Photo by Shane Flanigan

One rebound made the difference in Kent State’s 88-83 overtime loss to Valparaiso in the second game of the Joe Cipriano Nebraska Classic in front of 1,858 people Sunday afternoon at the M.A.C. Center.

Trailing by two with 4.7 seconds remaining in the game, Erik Buggs’ free throw attempt bounced off the rim and into a scramble of Flashes and Crusaders. A missed put-back attempt glanced off the backboard, and Valparaiso’s Kevin Van Wijk grabbed the rebound and dropped in the game-tying basket with one second left to play, stunning the home crowd.

“We get a rebound, we win the game,” Kent State coach Rob Senderoff said. “[I] don’t know what else to say.”

The sudden shift in momentum carried into the overtime period in which the Crusaders went on a 7-0 run in the first 2:55 to distance themselves from the Flashes. Valparaiso’s Matt Kenney smiled with satisfaction and pointed to the crowd as the final buzzer sounded, leaving the Flashes thinking only of what could have been.

“We had the game won,” Senderoff said. “You’ve got to be tougher to bounce back out of that, and obviously we’re not right now, we’re not tough enough to get a rebound when the game is over, if you get one.”

Following Chris Evans’ two successful free throws to take a 73-72 lead, senior Randal Holt stripped the ball away from Van Wijk and forced the Crusaders to foul him. Holt made the ensuing pair of free throws, and it appeared as though his steal secured a victory for Kent State.

But after Valparaiso’s Buggs missed the second of two free throws following a foul by Flashes guard Kris Brewer, Van Wijk tipped in the missed shot with one second remaining to tie the game at 75-75.

Notes: Randal Holt made three 3-pointers to move into fifth place all-time on Kent State’s career 3-point field goals with 168 career 3-pointers Holt’s 20 points makes him the third different Flash to score at least 20 in a game this season After making just 11 of 28 free throw attempts in a victory over Chicago State on Friday night, Kent State improved by successfully converting 30 of 40 attempts Sunday The 40 free throw attempts are the most since Nov. 26, 2010 versus Lehigh Kent State has scored at least 19 second-chance points in all four of its games this season Valparaiso’s Kevin Van Wijk made 13 of 14 free throw attempts and finished with a team-high 25 points

Valparaiso enjoyed offensive success for much of the afternoon, shooting 58.1 percent from the floor and making four of 12 3-point attempts.

“Those guys are great shooters, so giving them easy shots gets them going and I think that’s what we did,” Holt said. “They shot the ball well.”

Kent State’s first half was marred by 11 turnovers and a 36.4 shooting percentage, but the Flashes came back from a deficit that grew as large as 12 with 3:49 left in the first half to reach halftime trailing 36-28.

“I don’t think the turnovers are what cost us, but obviously you’ve got to do a better job taking care of the ball,” Senderoff said. “You can’t have a 1 to 3 assist-to-turnover ratio and expect to win.”

Led by a 12-point second-half effort from junior guard Bryson Pope, the Flashes continued to inch closer to tying the game and took their largest lead of the afternoon, a three-point advantage, with 1:35 to play in regulation.

Without 6-foot-9 junior forward Melvin Tabb, whose day was over with nine points and three rebounds after fouling out with 8:17 left to play, Van Wijk was able to grab the game’s most important rebound in the final seconds.

“We’re not as tough as we need to be,” Senderoff said. “We don’t understand how tough it is to win a game right now.”

Holt led the Flashes with 20 points to complement five steals, four rebounds and an assist. After the game, he echoed the words of Senderoff and placed the blame on both the unfamiliarity among his teammates and poor performance.

“It’s early in the season and I just think right now we’re just trying to find our niche as a team,” Holt said. “We’ve got a lot of newcomers, a lot of guys who have never played together before. We’re just all trying to come together as a team and listen to what our coach has us doing.

Kent State hosts Bethune-Cookman in the third game of the Joe Cipriano Nebraska Classic at 7 p.m. Tuesday at the M.A.C. Center.