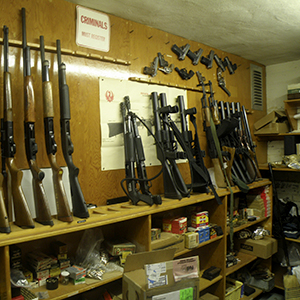 The armory room at the Kent Police Department. Photo by Kelly Maile

The future of Kent Police is uncertain after a levy for construction of a new police department failed to pass.

The levy asked voters to approve a 0.25 percent increase on income tax that would generate about $1.3 million annually for a new department.

Wayne Wilson, a member of Kent City Council, said the levy was a last resort for Kent Police.

“At this point, we just have to keep trying to put money into this building and keep it lasting longer, which that’s not a smart thing to do with the money, but we have no other option,” Wilson said. “If there was another option, we would rather do that than ask voters for more money because money is tight for everybody.”

From late August to early November, Kent Police offered an in-depth tour of the department to show the poor state of the building, originally constructed in 1924 for the Kent Fire Department.

Chief Michelle Lee said it has been a grueling four months trying to get voters and residents inside the building.

“I wish more people would take advantage of it,” Lee said. “It hasn’t been the great turn out I expected, but I realize that people have busy lives. Everyone who has come through basically said I had no idea how bad it was in here and have changed their minds about the building. I don’t think I’ve had one person that said, ‘This isn’t so bad. I think you guys can make do.’ ”

Sue Whiting, a 61-year-old Kent resident, has seen the building many times.

“I was a part of the first Kent Citizen Police Academy in 2010. Our class was given a tour of the building the first day,” Whiting said. “When the police offered the tours to the public, I wanted my husband and friends to take the tour too.”

Whiting was surprised when she saw the conditions of the building.

“I was shocked to see the poor conditions our police officers have to work in and have been doing so for years,” Whiting said. “Then I felt embarrassment that the city of Kent had not done something about it sooner.”

Whiting said she still remembers when she saw the building for the first time.

“I had never been in a police station before. I expected it to look like a regular modern business building: clean, dry, high tech and capable,” Whiting said. “To me, the place looks like a police department from the 1930s and 40s with a few 1980s computers.”

Currently, the building structure is not in compliance with modern-day building or zoning codes, National Fire Protection Association requirements, Ohio Departments of Rehabilitation and Correction and regulations or the Americans with Disabilities Act.

The State of Ohio Corrections Department gave the department a verbal notice: Bring the building up to date or prepare to shut down.

Captain Jayme Cole of the Kent Police said the costs to bring the building up to code and meet minimum standards of efficiency are about $12.5 million.

“We are no longer being efficient with the city’s money,” Cole said. “It’s to the point where we’re throwing good money away on bad repairs.”

For now, Kent Police will continue to patch and repair the building. Police Chief Lee said the building will be a financial burden at some point.

“We have been working on this since 1995. This building is not going to hold up forever,” Lee said. “This is a city issue and a city need.”