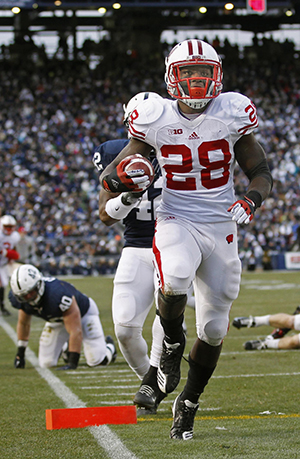 Wisconsin running back Montee Ball scores his NCAA record-setting touchdown on a 17-yard run against Penn State in the first quarter on Saturday, November 24, 2012, at Beaver Stadium in University Park, Pennsylvania. Ball's score was the 79th of his career to set the new NCAA benchmark. Photo by courtesy of MCT Campus.

Alabama squares off against Georgia for SEC Championship

Their task won’t be easy, as they go up against a tough Georgia team. Plenty of offense will be on display in this matchup, as both teams are averaging nearly identical points per game: Alabama is averaging 39 and Georgia averaging 38.

Both teams feature prolific quarterbacks. Alabama’s AJ McCarron is the straw that stirs the drink for the Crimson Tide offense, throwing for 2,507 passing yards and 25 touchdowns with only two interceptions. Georgia will counter with Aaron Murray, who has thrown for 3,201 passing yards, 30 touchdowns and seven interceptions.

The “x” factor in this matchup will be the rushing game. Both teams feature smashmouth running backs that can change the course of the game. Alabama will have the “two-headed monster” in running backs Eddie Lacy and T.J. Yeldon, who have combined for 24 rushing touchdowns on the year, while Georgia has the freshman tandem of Todd Gurley and Keith Marshall, who have rushed for a combined 1,858 yards.

This game is being billed as the “national semifinals,” as the winner is projected to face Notre Dame in the BCS National Championship in Miami.

My Prediction: Alabama will play for their third national title in four years, as they beat Georgia 24-14.

The Wisconsin Badgers will be going for their second straight Big Ten Championship Game victory and third straight appearance in the Rose Bowl Saturday, as they face the Nebraska Cornhuskers. Wisconsin is lucky to be playing in this game, as both Ohio State and Penn State are ahead of them in the Big Ten Leaders division standings, but are ineligible for postseason play as a result of the sanctions against them.

Wisconsin and Nebraska played each other in week five this season, with the Cornhuskers coming out on top, in a close game, 30-27. Wisconsin will be led by star running back Montee Ball. Ball, who had Heisman hopes at the beginning of the season, has amassed 1,528 rushing yards and 18 touchdowns.

Nebraska will be led by steadily improving quarterback Taylor Martinez. Martinez has counted for 3,316 yards of total offense and 29 touchdowns (21 passing, eight rushing) for its offense. The Cornhuskers enter this game on fire, winning their last six league games. They will have to keep that same frame of mind and attitude Saturday in Indianapolis against a Wisconsin team that has lost three of their last four.

Can Taylor Martinez lead Nebraska to a Big Ten Championship in only their second year in the league? Can Montee Ball steal the show and help lead the Badgers to the Rose Bowl once again?

Stanford will have a rematch with UCLA this Friday, as they will face each other in the PAC-12 Championship game. Not many people were expecting this matchup, as most people had picked Oregon vs. USC at the beginning of the year.

Stanford has won seven of their last eight games, highlighted by their upset win over Oregon. They will be led by running back Stepfan Taylor, who has rushed for 1,364 yards and 11 touchdowns, and will be going for his fourth straight game of rushing for at least 100 yards rushing. Stanford quarterback Kevin Hogan, who has thrown for 818 passing yards and eight touchdowns, will be going for his fifth straight game of throwing for at least 160 yards and a touchdown.

UCLA will be led by quarterback Brett Hundley, who has thrown for 3,234 passing yards and 26 touchdowns, while rushing for 282 yards and eight touchdowns. Hundley will have to keep his head on a swivel this game, as he was sacked seven times against Stanford last week. Running back Johnathan Franklin will lead the Bruin rushing attack, as he has rushed for 1,506 rushing yards and 11 touchdowns.

The Bruins will be looking to correct their mistakes and return to the Rose Bowl for the first time in 14 years. Kent State fans will also have their eye on this matchup, as a BCS bowl berth might be in the cards.

My Prediction: Stanford goes to the Rose Bowl and wins 27-21.