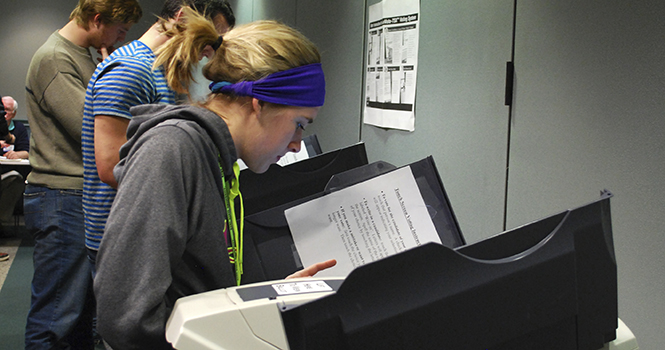 Katie Shields, a freshman at Kent State, votes at the Rec Center on November 6 2012. Photo by Melanie Nesteruk.

Young people turned out and made their voices heard nationwide Tuesday, even if that meant filling out provisional ballots.

Provisional ballots are used to record votes when a voter’s eligibility is in question. They may be used when a voter’s name doesn’t appear on a precinct’s electoral roll or when the voter’s registration contains incorrect or outdated information.

Brad Cromes, deputy director at the Portage County Board of Elections, said of the county’s 2,342 provisional ballots, 2,007 were cast on Election Day.

“That’s a lot. The vast majority we’re finding based on calls to the office and the physical data over time are address changes where somebody was registered to vote then moved between the time they registered and when they presented to vote,” Cromes said. “When you do that, you need to vote a provisional ballot so we can verify you are a registered elector.”

Provisional ballots can take anywhere from a week to 10 days after the election to be verified, but Cromes said none of Portage County’s political races are close enough to be affected by the remaining provisional votes.

Heather Smith, president of the youth voting organization Rock the Vote, said she received hundreds of calls Tuesday from concerned young voters who were turned away at polling locations or were forced to file provisional ballots instead.

“It has actually recommitted us here to address some of the antiquated practices of our election process,” Smith said. “Most of the time it’s unintentional human error keeping people off the voter rolls or unintentionally disenfranchising voters.”

Smith said she mostly fielded calls from voters who did not appear on voter registration rolls because they submitted a form too late or from those who arrived at polling locations in the wrong jurisdiction.

Peter Levine, director of the Center for Information and Research on Civic Learning and Engagement (CIRCLE), a nonpartisan voting research center, said there are many dimensions to the “voter-confusion” problem. He said 50 different voting laws have changed between 2010 and now, leaving individual voters to keep up with constantly fluctuating rules and regulations.

Levine said CIRCLE recently asked a cross section of young voters if they were aware of early voting and what identification they needed to bring to the polls. He said no more than 43 percent of those surveyed knew voting law specifics.

“We are creating a system which is very difficult to navigate,” Levine said. “If turnout would have been down and people asked me why, I would have said that people didn’t understand the voting laws in their own states.”

Even with the provisional ballot confusion, Smith said she was very happy with voter turnout amongst young people – an estimated 49.3 percent of all eligible young voters made their way to the polls.

The youth vote was also instrumental in swinging the election in President Barack Obama’s favor. The president won the group decisively, capturing 60 percent of the 18-29 demographic compared to Mitt Romney’s 37 percent share.

“We’ve been fighting this backstory that millennials are plagued by the same apathy of Gen X,” Smith said. “Young Americans showed up, voted, and made it clear they are the generation that will take our country forward.”