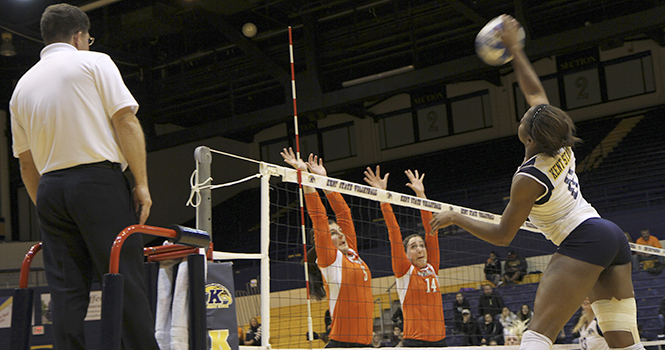 Sophomore outside hitter Tinuke Aderemi-Ibitola spikes the ball on her opponents Friday, Oct. 26 during a 3-2 home loss to Bowling Green. The Kent State volleyball team will play their final home game for their 2012 season against Ohio University on Thursday, Nov. 1. Photo by Shane Flanigan.

Kent State will enter Thursday night’s match with an overall record of 6-18 and a conference record 3-9. After going 0-2 last week, first-year head coach Don Gromala said his team has to focus on a couple key things to avoid another disappointing weekend.

“We have to maintain our composure after we win a set,” Gromala said. “Teams are making adjustments on us, and we aren’t countering those adjustments.”

With Thursday’s match marking the end of the home campaign and with the season coming to an end, Gromala knows how important these last few games are.

“Every match is important at this time of season,” Gromala said. “We’re still in the mix to qualify for the M.A.C. Tournament, and we are focusing on one match at a time.”

Kent State first opponent of the week is the Ohio Bobcats. The Bobcats will enter Thursday night’s match with an overall record of 16-8 and a MAC record 11-1. Ohio will come into the match with an 11 game win streak and currently hold the top spot in the Mid-American Conference standings. Last week the Bobcats had two home matches against Miami and Bowling Green. The Bobcats won both matches, while defeating Miami in four sets, and Bowling Green in three.

This won’t be the first time that the Bobcats and the Golden Flashes have faced each other this year. The Flashes made the trip to Ohio University in late September, where the Bobcats won the match in three sets.

“They are solid defensively,” Gromala said about the Bobcats. “They’re the best blocking team in the conference, and very disciplined with their floor defense.”

With the two matches this week, Gromala knows what his team has to do to come out victorious.

“Number one for us is passing the ball well,” Gromala said. “In order to spread out our offense, and take some stress off of our outside hitters, we have to be in system to set our middles.”

With Thursday night’s match being the last one of the 2012 season, the Kent State Golden Flashes will host its 2012 senior night. Kent State will recognize senior co-captain Kathy Krupa during the Senior Day festivities. Krupa, who is from Burbank, Ill., is ranked 6th in school history in blocks per set and ninth in block assists. They will recognize Krupa following the match against Ohio, which starts at 7 p.m.