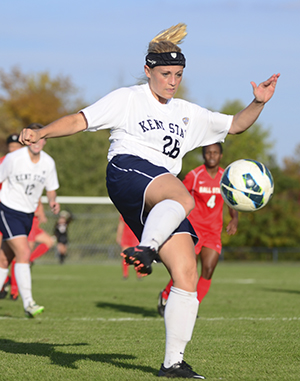 The Flashes soccer team ended its season with a 3-1 loss to Miami University Friday in the semifinal round of the Mid-American Conference Championship.

“I thought we fought really hard,” head coach Rob Marinaro said. “There were moments in the game where we could have done a better job of playing our own game but we were trying to match up with a very athletic Miami team, and you have to give Miami a lot of credit.”

Top-seeded Miami started off strong, scoring in the eighth minute when freshman Haley Walter sent a cross to junior Kayla Zakrzewski, who drilled a shot into the upper corner of the goal. The Flashes kept the RedHawks from scoring again in the first half and for the majority of the second.

Miami scored the second goal in the 80th minute when the ball deflected near the net and went past the keeper. The Flashes scored in the 88th minute when freshman Briana Bartolone volleyed the ball in on a corner kick by junior Jaclyn Dutton.

Thirty seconds later, a foul on Kent State in the penalty box gave Miami another goal, leaving the game 3-1 with two minutes left.

“I think we fought really hard, and I think we really had a great season so I’m proud of our team this year,” senior Sara Henderson said.

The loss marks the end of seniors Sara Henderson, Hannah Newhouse, Christine Pellegrino and Megan Repas’ respective careers with the Flashes. The four women helped the soccer team to win more than 25 games over the last two seasons — the most in a two-year span in program history.

“It’s bittersweet here at the end, but it’s a tremendous group of seniors and we’re really proud of what they’ve done,” said Marinaro. “They’ve put this program back on the map, and we owe them a lot for doing that.”