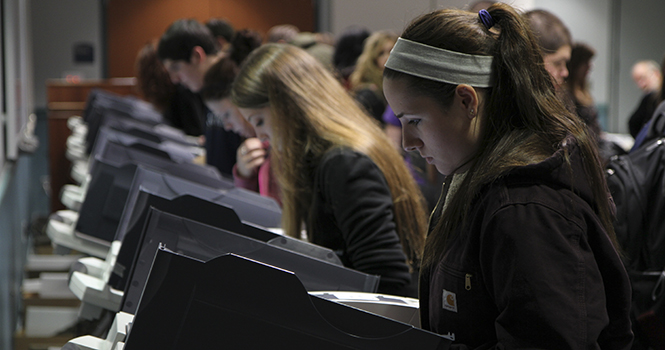 Students cast their vote for the presedential election while others wait in line Tuesday, Nov. 6 inside the Student Recreation and Wellness Center. Some students waited as long as an hour before casting their vote. Photo by Shane Flanigan

Lines were long and enthusiasm was high at the various polling locations on Kent State’s campus Tuesday.

Many of the students who stood in line to vote had never done so in a presidential election before now — which they said made the experience even more exciting.

Bradyn Shively, freshman journalism major, said the process was “painless” after voting in the Student Recreation and Wellness Center around 11 a.m. He said he felt lucky to have chosen at the time he did, because there wasn’t a line.

“It was actually less difficult than what I thought it was going to be,” Shively said.

Shively said he voted for President Barack Obama because he believes Gov. Mitt Romney is just not a good choice for president.

“[Romney’s] kind of flip-floppy. I think with Obama you know where he stands and some of his policies are better for the country,” he said.

Tenia Jones, freshman pre-fashion design and merchandising major, said her first voting experience didn’t come without roadblocks. Due to residence conflicts, Jones had to submit a provisional ballot for her vote to be counted once her eligibility was confirmed. She said she is worried that her ballot won’t mean as much because it won’t be immediately counted.

Jones wasn’t the only one who encountered problems at the polls. Drew Howard, senior business management major, said by the time he finally cast his ballot, he’d been to his polling location three times. He said the root of the issue was address confusion. The address on his form of identification didn’t match his actual address, but he eventually worked it out by bringing a utility bill as additional proof of residence.

Howard said he stayed persistent, even after multiple trips because of his dedication to electing Romney as president.

“We can’t have four more years of this: spending what we don’t have,” he said.

The Presbyterian Church on East Summit Street was less trafficked in the afternoon. Students who did show up to vote experienced shorter than expected wait times.

Eric Petrovich, junior business major, said America’s current economic state is what brought him out to the polls. He voted for Romney, he said, because of Romney’s experience in the business sector as CEO of Bain Capital.

“I think we need a change,” he said. “I think he would do a better job helping the economy and creating jobs.”

Many students said the determining factors for them in this election were issues like gay rights and women’s rights.

Jason Craig, graduate exercise, leisure and sport major, said he voted in the 2008 election, but thinks this is one of the most critical elections in recent history. He said it is rare that candidates are so starkly different in nearly every way.

Jim Mueller, a candidate running for state senate, was personally promoting himself outside of the United Church of Christ, where the line was longer than many others, handing out leaflets and shaking hands. Mueller said students have a vested interest in this election, particularly in light of the fact that a lot of the aid that students receive is through government assistance. He said he doesn’t see the same enthusiasm for state elections as he does national ones, but wishes that was different.

“For the most part, what brings people to the polls is big races like U.S. Senate and the presidency, but there are a lot of local issues that are important for students, as well,” Mueller said.

Gus King, sophomore accounting major, said he only voted in the presidential race and left local and state races blank. He said he’s only lived in Kent a little over a year and doesn’t want to take responsibility for electing candidates with policies that are unfamiliar to him.

“I think [local races are] as important,” King said. “But I’m relatively new to the area, so I’m still trying to understand who’s who.”