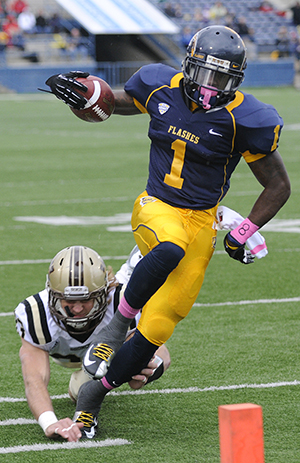 Senior running back Dri Archer defends the ball from a Western Michigan player during the first half of Kent's Homecoming game. The Flashes triumphed 41-24. Photo by Hannah Potes.

awards Wednesday, and the Kent

named MAC Coach of the Year,

and running back Dri Archer was

Hazell, who is in his second

record with the Flashes and led

the team to its first 11-win season

for touchdowns and leads the

avoided kicking to Archer since

the fifth game of the season.

The junior running back scored

21 touchdowns in the regular season,

and was also named to First-

Team All-MAC Offense. He was

Nix was named to the First-

time he has been selected in

with First-team, Second-Team or

is the most selections the Flashes

will compete in the MAC Championship

Detroit against the Northern Illinois

Archer was also awarded two spots on the All-Mac First Team, as a running back and kick return specialist.

The team’s turnaround season and 11-1 record, including a perfect 8-0 record in the MAC East Division, pulled Kent to a No. 17 rank in the overall BCS standings and a guaranteed bowl bid. The team has won 15 of its last 17 games under Hazell.

Check back on KentWired.com for more updates.