Sherrod Brown talks what’s at stake for KSU this election 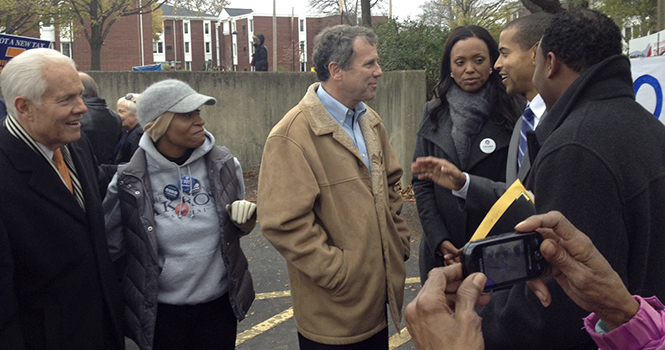 The early-voting line spiraled around the Summit County Board of Elections Sunday — two days before the election — as Ohio Democratic Senator Sherrod Brown arrived to mingle with voters.

In what has been one of the most expensive and heated Senate races this election year, Brown took a break from posing for photos and chatting with Akronites to speak to the Daily Kent Stater about what’s at stake for Kent State University students when ballots are cast Tuesday.

“Your state government has failed to fund [Kent State University],” Brown said. “It’s a combination: The state needs to do better; federal governments need to freeze [interest rates on] Stafford Loans … The focus has to be on how we make school more accessible and more affordable, whether it’s Kent State students, Akron [University students], Ohio State [students] — whatever.”

Last spring, Ohio’s capital budget totaled $350 million, which was doled out to the 16 public universities in the state. Kent State was recommended for $20 million in capital funding.

Because its renovation needs surpassed $400 million, Kent State has taken measures to make up for its loss of state money. The university has raised tuition and fees to the maximum amount permitted by Ohio for the past two years.

In addition, a $440 overload fee — charged per hour after 17 credit hours; 16 for the next full school year — was approved last spring to assist in financing a $170 million renovation project.

Brown said his legislation has worked to eliminate “the middle man” from higher education by cutting funding to private banks and pouring that money into Pell Grants, but there’s a long way to go. Voters should bear in mind, he said, that this election is a “fork in the road.”

“You fix it by state government doing a better job than they have,” Brown said. “And that means legislators are more interested in higher [education] than they are in tax cuts for the rich … that’s the fork in the road, that’s the choice in this election.”

Brown connected his assertions to personal experiences: His wife, journalist Connie Schultz, graduated from Kent State with $1,500 of debt during the late 1970s. The government has not done much to provide more affordable opportunities for students since then.

“The government, by in large in the last 30 years, has failed to keep tuition in check,” Brown said. “Every generation has an obligation to the generations coming up. Frankly, state government and federal government, to some degree, have not done their jobs in giving students the opportunity to get ahead.”

Brown also spoke about job creation — and the accusations that he is a “job-killer” — and its connection to the success of college students.

$31 million have been spent to smear Brown’s public image, he said, and he has theories about who is paying for it.

Brown speculated that oil companies and the Wall Street elite, among others, have funneled money into diminishing his reputation, and it isn’t true, he said, that his policies have destroyed American jobs.

In this crucial election, Brown said voters should think about the future of American jobs and higher education.

“Do you want to see tax cuts for the rich paid for by more cuts in student loans? It’s a pretty clear choice,” Brown said. “I’m saying it over and over, but that’s exactly what’s happened both at the state level and on the federal level. We need to move forward on this and not back the way that we have been.”