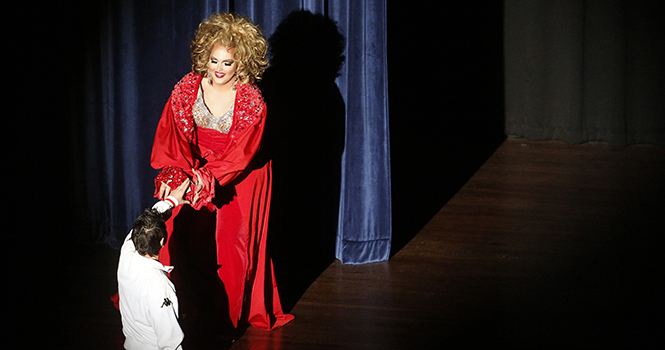 Shelby Colby is handed money by a spectator as she performs at a drag show held in the Ballroom on October 31, 2012. The drag show was part of Kent Interhall council's annual Sex Week, which is filled with programs intended to educate students about sex. Photo by Coty Giannelli.

The Sex Week’s annual Drag Show at 8 p.m. Wednesday started with the curtain slowly opening to reveal one of the drag queens, Danyel Vasquez.

“Are you ready for a show bitches?” she asked the crowd.

Students cheered and clapped as one by one, each of the three queens danced and lip-synced on the stage to songs by artists such as Whitney Houston, Adele and Rihanna. Several students walked up to the stage to give the queens dollars while they performed.

Vasquez, along with other drag queens Brionna Brooks and Shelby Colby danced around the stage in dresses, pantsuits and a lot of glitter.

Danielle Melidona, vice president for programming and development for Kent Interhall Council, feels that students can benefit from going to the show.

“I think the drag show is an important part of Sex Week, and it’s been one of our traditional programs that’s been happening for as long as Sex Week’s been around,” Melidona said. “I think that they bring an educational aspect to the program, showing people what it does mean to be a drag queen, what it means to kind of have that lifestyle, not just as a thing to do but as a career. I think that students are able to kind of see that and see what it’s all about before they make judgments.”

Throughout the show, the queens laughed with one another and poked fun at several audience members.

To get students excited about the show, a large screen on stage allowed them to see live tweets from others at the event with the hash tag #SexWeek2012. Students were tweeting about the show and the drag queens.

“Oh, you people are evil. Danyel, I don’t know if you know this is going on, but these bitches are tweeting about us as we speak,” Brooks said as she read the tweets.

Victor Garcia, freshman fashion merchandising major, said he had never been to a drag show, but he had heard they were fun.

“They were really funny, and they cracked a lot of jokes, and they have really good audience interaction,” he said.

“The entertainers were really great dancers,” she said.

Melidona said that in the past, only residence hall students were allowed in the show first, and then the remaining seats were given to other students. This year, KIC and the Undergraduate Student Government co-sponsored the event, allowing for all students to enter.

Students in the audience received free T-shirts and also were able to hear Kent’s a cappella group, the Kent Clarks, perform before and during the performance.