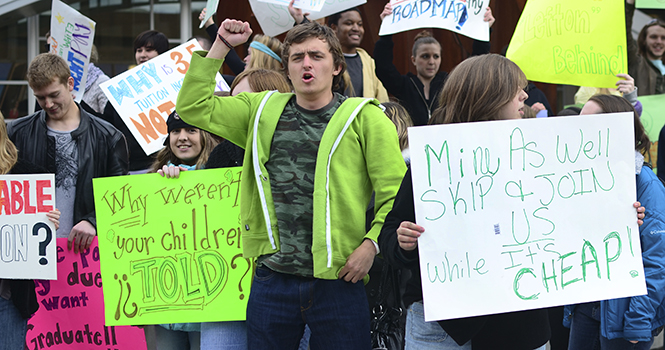 Vladimir Lovitz, freshman painting major, protests with students against the new credit hour fee outside the library on April 12, 2012. Photo by Nancy Urchak.

Earlier this year, students claimed Risman Plaza to voice disapproval of Kent State’s new $440 fee for anyone taking more than 18 credit hours this semester — claiming it would punish ambitious students. In September, a religious demonstration unaffiliated with the university sparked a series of heated student counter-demonstrations that had authorities on their toes.

While all participants of these spectacles were protected under the First Amendment to exercise their right to peacefully assemble, student demonstrations — such as a rally, sit-in or fast — are also at the mercy of university policy and safety guidelines.

From social events to rallies hosted by registered student organizations to lone grassroots efforts on campus, all students are subject to a similar set of rules when demonstrating on campus. Those rules, however, are on a case-by-case basis, and there isn’t a one-size-fits-all rule.

“Each situation is different — where it is, the time of day, what is happening in that particular area — would really impact the decision whether or not that event is being disruptive or not,” said Dean Tondiglia, assistant chief of police for the Kent State Police Department.

University policy encourages students to use nonintrusive, high-trafficked areas to assemble, such as the student center plaza, in front of the M.A.C. Center, on the Front Campus lawn, the commons or Manchester Field. Students can book other, more reserved areas by registering with the Center for Student Involvement.

Protests are considered intrusive if they are held indoors or close enough to campus buildings to disrupt classes that are in session, Tondiglia said.

If no one has claimed the space, the original protesters are not limited. For counter-protesting, demonstrations are limited to one-hour blocks at a time.

“[Students] should make sure it’s a peaceful protest, and that they’re abiding by the laws,” Penn said. “That way they don’t get in trouble criminally for protesting something they believe in.”

Students are never required to register any type of protest, but the university must approve any use of sound amplification including megaphones, microphones and radios, said Timeka Rashid, director for the Center of Student Involvement.

Anyone who plans to sell any kind of product to students on campus also must have permission to do so, she said.

The CSI office usually hears about student demonstrations after the fact, and Rashid said the staff works with the Kent State Police Department to ensure the protest remains nonviolent.

During last year’s demonstration outside of the University Library protesting the $440 fee, Rashid said the office dispatched staff members to remind demonstrators of acceptable behavior.

“For example, do not block entrances, monitor noise levels, et cetera,” she said.

Rashid said she advises all students who intend to protest on campus to discuss plans with the office first, though they’re not required to.

“What we’ll do is try to let you know your rights and advise you on what you need to know in terms of what isn’t acceptable,” she said. “My big piece of advice would be to set up some time and get educated so you don’t make assumptions.”

Students whose conduct is considered excessively inappropriate could be referred to conduct court, where, depending on the severity of the offense, they’ll receive a first-offense warning, according to policies in the Office of Student Conduct.

If police do step in, Penn said students are most often charged with disorderly conduct, disturbing the peace or failure to disperse.

Students convinced unlawful or unreasonable limitations have been imposed upon a demonstration may appeal to Rashid or Office of the Student Ombuds, which acts as a student advocate.