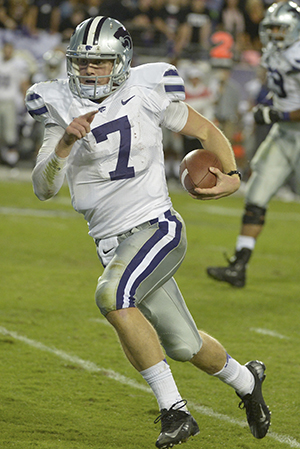 For the first time in school history, Kansas State is the No. 1 team in the BCS rankings. Getting to No. 1 is the easy part, staying there is the hard part — as evidenced by former No. 1 Alabama’s loss last week.

The Kansas State Wildcats are in the midst of a dream season, where they find themselves two wins away from a possible berth in the BCS National Championship game.

They will head to Waco, Texas, to face Baylor, a team that is on a downward slide after losing five of its past six games. Kansas State is led by quarterback Collin Klein, a Heisman Trophy candidate.

Klein is the straw that stirs the drink for the Wildcat offense, as he has thrown for 2,020 passing yards on the season and thrown for 12 touchdowns, while adding 748 rushing yards and 19 touchdowns.

Klein, along with the rest of the Wildcat offense, will give Baylor defensive coordinator Phil Bennett nightmares, as the Baylor defense has given up at least 35 points in six of their nine games this season.

Baylor is led by quarterback Nick Florence, who has done an admirable job filling in for Robert Griffin III. Florence has thrown for 3,191 passing yards and 25 touchdowns this season.

Receiver Terrance Williams leads the Baylor receiving corps, amassing 1,431 receiving yards and 10 touchdowns on the season. Can K-State handle the pressure that comes with being the No. 1 team in the country?

Late in the season, the Oregon Ducks find themselves in familiar territory, ranked No. 2 in the BCS rankings and in prime position for their second berth in the BCS National Championship game in three years.

Oregon is in the midst of a late-season stretch, where they face three top-20 opponents in four weeks. As the season goes on, the Oregon offense continues to be their key to success.

Mariota has led the Ducks’ passing game, throwing for 2,164 passing yards and 28 touchdowns, while Barner has paced the Ducks’ rushing attack, rushing for 1,360 yards and 19 touchdowns. Stanford continues to surprise people, being right in the thick of the PAC-12 North race at the end of the season.

Stanford has a balanced offensive attack, led by quarterback Josh Nunes, who has thrown for 1,643 passing yards, and running back Stepfan Taylor, who has rushed for 1,061 yards and nine touchdowns.

Can the Ducks continue their magic in the last regular season game at Autzen Stadium this season?

My Prediction: The Oregon offense overwhelms the Stanford defense and wins 31-17.

A return to glory for the “Golden Domers” could be on the horizon, but that road to glory goes through Wake Forest.

Notre Dame’s “smashmouth” defense will be on display one last time in South Bend this season, as they look to continue their streak of allowing 17 or fewer points in nine of their 10 games this season.

Notre Dame is led by their steadily improving quarterback Everett Golson, who has thrown for 1,572 passing yards and eight touchdowns this season. Golson will attempt to throw for at least 200 yards and throw at least two touchdowns for the third straight game.

The obvious strength of the Irish is their defense, as they are averaging 11.1 points allowed per game, which is the best in the country. The Irish defense is led by Heisman Trophy candidate Manti Te’o, who has totaled 90 tackles and six interceptions, which is a school record, this season.

Wake Forest will be led by quarterback Tanner Price, who has thrown for 1,965 passing yards and 12 touchdowns this season. Price will lead a sputtering Wake Forest offense, which is averaging a lowly 20.1 points per game.

Each team will be playing for something different, as Notre Dame will be continuing their march to the National Championship while Wake Forest will relish at the chance to play spoiler to the Irish.

My Prediction: Notre Dame beats Wake Forest and sends the seniors out in style, 28-14.